Tiara’s may be in or out for some brides but for a Royal Bride they are part of their overall attire for the pomp, pageantry and ceremony for the splendid day. Did you know that most royal tiara’s are actually convertible to necklaces? It’s true, if you look they are suspended above the base pinned into the hair. 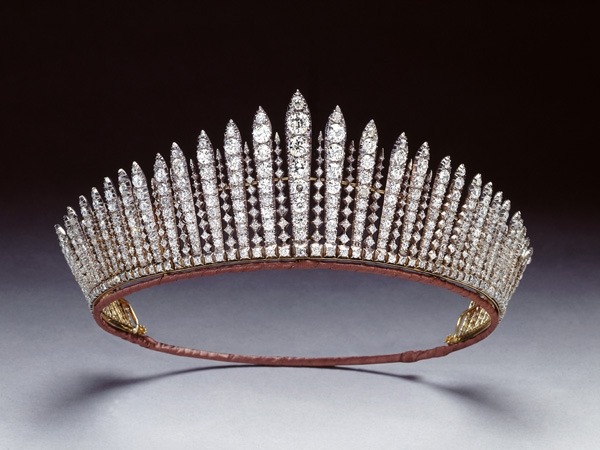 Queen Elizabeth The Queen Mother loaned a tiara called by many ‘an ugly spiked tiara’, to her daughter, Princess Elizabeth, the future Elizabeth II as “something borrowed” for her wedding in 1947. As The Princess Elizabeth was getting dressed at Buckingham Palace before leaving for Westminster Abbey the tiara snapped. Luckily the court jeweler was standing by in case of emergency. The jeweler was rushed to his work room by a police escort. Queen Elizabeth reassured her daughter that it would be fixed in time, and it was. The Queen Mother later also loaned it to her granddaughter The Princess Anne for her marriage to Captain Mark Phillips in 1973.

“In the evening after Prince Charles and Diana’s wedding, we all went to a sort of semi-private party and she was there and she seemed incredibly relaxed and happy and I just remember she had a cracking headache too, because she wasn’t used to wearing a tiara all morning,” said Charles Spencer, 9th Earl Spencer, brother of Diana – Princess of Wales. The tiara was a Spencer family piece and has an elaborate design of stylized flowers decorated with diamonds in silver settings.

On her wedding day to Prince Andrew in 1986, Sarah Ferguson entered Westminster Abbey as a commoner and departed the Duchess of York. For the first time in many years she wore a floral headpiece in front of the tiara given to her by Queen Elizabeth II. Sarah wanted to enter the Abbey as a commoner and depart like a princess wearing the stunning tiara. Mission accomplished!

HRH Sophie, Countess of Wessex wore a diamond tiara from the Queen’s private collection held the veil of silk tulle also known as the ‘honeycomb tiara’. Speculation surrounds the historical significance that Sophie’s wedding tiara is said to have been made from the four anthemions that were detachable from Queen Victoria’s Regal Circlet.

The Papyrus tiara was made in 1925 and given as a wedding present to Lady Elizabeth Bowes-Lyon the future Queen Elizabeth-Queen Mother. She in turn gave it to her daughter Princess Margaret to be used for many State occasions. Later, it was lent to Serena Stanhope by Princess Margaret for Serena’s wedding to Princess Margaret’s son David, Viscount Linley in 1993.It is a tiara with papyrus-shaped mounts framed in scrolls separated with palmettes. The diamond trails arch above, surmounted by diamonds and a pearl.

So many royal weddings have showcased a tiara for the bride from the royal collection except Princess Diana who wore an heirloom diamond tiara that was report to be so heavy it gave her a migraine headache by the end of the day. Our prediction is Miss Catherine Middleton will have the honor of wearing the same tiara the Queen wore for her wedding in 1947 and the same tiara worn by Princess Anne in 1974.

Share this...
How Sweet it is with David’s Cakes of Distinction in Liverpool
The Royal Wedding Music

If you’re having trouble writing thank you notes, here’s the key: remember the three-sentence rule.

How to Write a Great Thank You Note

If you’re having trouble writing thank you notes, here’s the key: remember the three-sentence rule.

How to Write a Great Thank You Note

Kate leaving the Goring Hotel with her Father

Kate leaving the Goring Hotel with her Father

Kate should just be leaving the Goring Hotel with her father. For past royal weddings for Princess Diana and Sarah Ferguson...

Come with us to the Royal Wedding!

Come with us to the Royal Wedding!

The world is waiting in anticipation of the wedding of this generation, but really is there anyone more excited than us about...