The Cinderella Glass Coach will not be the preferred mode of transportation for Miss Catherine Middleton traveling on her wedding day to marry Prince William. For years the Glass Coach as it has come to be known in the royal mews, has been the transportation to Westminster Abbey or St. Paul’s Cathedral for royal brides. For a change in tradition, Miss Middleton has requested to arrive in one of the five Phantom VI Rolls Royce state cars owned by the Queen. As a number of royal followers see this as a change in tradition they also see it as a security measure following the attack on Princes Charles and the Duchess of Cornwall’s car while in the streets of London traveling to a royal engagement. The Phantom VI is bullet proof unlike the glass coach. The last time members of the royal family and members of a wedding party arrived for a royal wedding via car was the marriage of Princess Alexandra of Kent and Sir Angus Ogilvy in Westminster Abbey on April 24, 1963. The wedding service will begin at 11am. Miss Middleton will travel to the wedding service by car along a route that will include The Mall, Horse Guards Parade, Whitehall and Parliament Square; and she and Prince William will return to Buckingham Palace by the same route in a carriage procession. 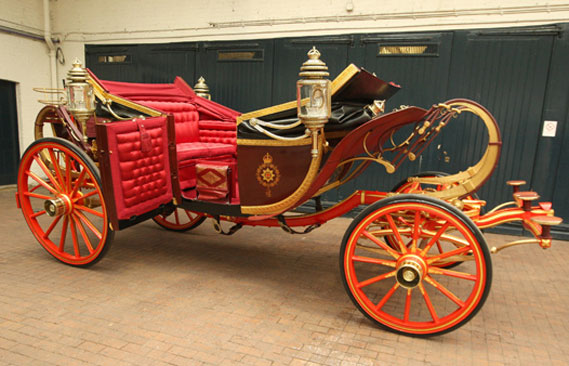 The recessional carriage route to Buckingham Palace will provide Prince William and Catherine Middleton the 1902 State Landau built by King Edward VII when he ascended the throne following the death of his mother Queen Victoria in 1901. After sixty-four years of Victorian formality and “heavy colors and draperies,” the King wanted to combine his natural flair and showmanship, color and love for pomp and ceremony to be the hallmark of the new reign.

Used by Queen Elizabeth II for formal state visits by foreign heads of state, the 1902 State Landau has only be used for two royal bride, Lady Diana Spencer with Prince Charles the Prince of Wales in 1981 and again five years later when Sarah Ferguson the Duchess of York married Prince Andrew in 1986.

Share this...
Kate leaving the Goring Hotel with her Father
The Wedding Guys get the fashion 411 with British Designer Stephanie Allin

We are really excited that Amy Sparks from Digital Art House has uploaded the highlight video from the 2009 Trend Wedding....

Signing On for Guest Books

Signing On for Guest Books

When the celebrating begins at a wedding the last thing a guest wants to do is take the time to recall their proper English...