Lessons from the Royal Wedding – By Ryan Hanson

Ryan shares a first-hand perspective from behind the scenes.

On Friday April 29, 2011, I found myself standing towards the front of the crowd massed across the street from Westminster Abbey, where the wedding of His Royal Highness Prince William of Wales and Catherine Middleton was to take place. I had been standing in that position since just after 3am, and while I was tired and sore, I knew the experience was well worth it.

I had traveled to London with The Wedding Guys—Matthew Trettel and Bruce Vassar—who were abroad interviewing local wedding and event professionals about the details behind British weddings and royal events. Here are some of the perceptions I came home with.

IDEA 1: Local, organic, sustainable, natural and reusable is IN. Not that it hasn’t been for a while, but I think this event will cement the trend of local and sustainable food and natural and reusable or re-plantable decor. The green twist for this wedding is that they promoted green as an ongoing practice with meaningful roots. The incorporation of fresh, local foods is a well-known initiative of Prince Charles of Wales, and as host of the event, his menu featured local fare sustainably grown on his estate. The trees and plants in the Abbey were replanted or delivered to area children’s hospitals, so served a purpose after the event.

IDEA 2: Tradition didn’t die; it just required a re-write. Let’s not kid ourselves; this was a royal wedding, with pomp, circumstance, protocol and distinct, traditional icons, including the processional music, the carriage from Westminster Abbey to Buckingham Palace and the kiss(es) on the balcony before the kingdom. But the message of this wedding was that you can have a traditional wedding your way: Catherine changed the vows to omit “submit”; the program was digitally distributed via social media for the masses and in place of gifts, the couple asked for folks to text and tweet in their donations to charity. Also, in an interesting twist, the couple changed the traditional wedding-breakfast-honeymoon model, hosting a private reception and dinner for 300 which could be called traditionally American. Elements included a candlelit walkway, cocktails in the foyer, dinner at banquet rounds of ten, toasts and speeches, and an after-party set up as a club with a live band, laser lights and lounge furniture, a late-night snack break and a fireworks sendoff.

IDEA 3: Let them eat fruitcake. Traditional British wedding cake is fruitcake. It tastes nothing like what Americans think of as fruitcake—it is wonderfully fresh and delicious. The reason for fruitcake is that its denseness works for stacking and decorating, which can reach heights upwards of seven feet and take a week or more to decorate. Standard sponge cake just can’t stand up to that challenge. But seriously, after trying some, I am completely in favor of this becoming a trend.

IDEA 4: The classic is forever. We’ve seen that dress before—Grace Kelly, 1956. Those flowers—Lily of the Valley, the queen’s personal favorite—we’ve seen them too. But that doesn’t mean Catherine Middleton didn’t do it her own way. Classics are

IDEA 5: Sometimes local realities trump global expectations. This idea is targeted to folks outside of the wedding business, but one thing kept resonating as we met with event professionals and watched UK media. And that’s that this wedding wasn’t going to live up to its hype—probably intentionally—because the royal family was keenly aware that the primary concern of the people was the sluggish economy. Don’t get me wrong; this wedding was the perfect picture of pomp and circumstance, with all of the traditional landmarks one would expect. But everything felt subdued, even underwhelming by the U.S. media standards. The entire concept was common, approachable, accessible and available. William and Kate got married like their friends do—a chapel wedding, a dinner, and a party—granted, in a palace with 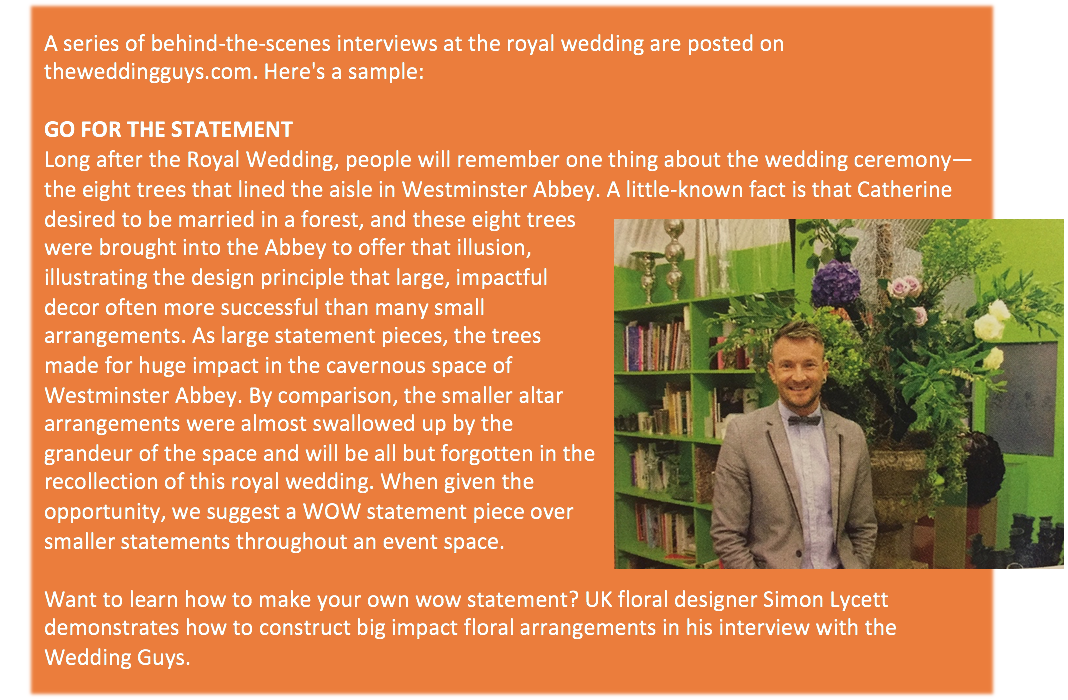 heads of state surrounding them, but the overall experience was geared toward the common people. Specific action was taken to make this event as accessible to the masses through social and new media. Prior to the wedding, a very “normal” engagement photo of the couple was circulated; the night before the wedding, Prince William stepped out of his house to talk with guests camped outside making sure they were warm and thanking them for coming. Even the fact that Prince William drove Kate from the palace in a car with “Just Married” decor made this wedding feel both authentic but also quite regular. And all of the details—the dress, the flowers, the plants in the church, the wedding cakes crafted by a supermarket baker and a mass-production cookie company—said anyone could have this wedding.

Like any organization staging a meeting circa 2009, the perception of spending too much or showing off seemed a no-no, regardless of how extravagant the brand may be or, in this case, remarkably rare the wedding of a future king of England is. Therefore as an industry we can take this opportunity to recognize that sometimes, no matter what tradition or past history dictates or what the competition is doing or what we think the brand should be, internal politics or local realities may trump our expectations for the event our clients needs us to create.

My final thought is that the entire experience was a wonderful refresher on why I bother being in the event business. I often think that, in the middle of client meetings, and planning and staging an event, it is very easy to lose sight of what it is like to be in the audience; what we forget just how powerful an experience an event can be. Standing there across the street from Westminster Abbey, and sharing this moment with a community of several thousands on the street and millions or even a billion more through media—is moving. Something exhilarating creeps up and overcomes you as the crowd swells, moves, waits, cheers, listens, becomes captivated and chants and cheers, and you can’t help but give yourself over to it and participate. I remember the swells of people in Grant Park the night President Obama was elected, and the crowds gathering the streets of Egypt or Tunisia, or the memorials for the earthquakes in Haiti, Chile, or Japan. These historic moments are defined by the crowds who bear witness to them. Just like a gathering in a park for the Fourth of July or congregating in a convention center for a corporate meeting. The job of the event is to capitalize on the energy of the crowd and propel it towards some purpose. And the craft of design is the creation and definition of space for that community to have that experience.

Share this...
Have Your Wedding in a Royal Palace
In the News: Twin Cities Business

To us there is one designer who truly re-invents bridal each and every market. Not just to set up new trends for brides (as we...

Stunning and sophisticated, Pnina Tornai is a designer for the most stylish and confident bride! Pnina creates a buzz and...

It’s that time again to cuddle up with your significant other and celebrate Valentine’s Day! Whether it’s your first or...