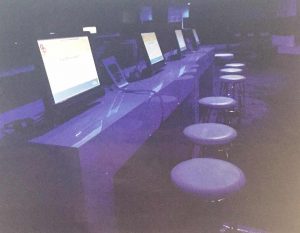 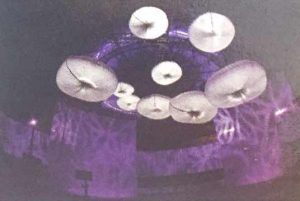 Separate employee groups came together to create Boston Scientific’s Minnesota-based Cardiology, Rhythm, and Vascular (CRV) division, and the company wanted to present the division brand and ensure employees understood the organization’s vision and goals. To help with that effort, the museum-style CRV Experience was planned in just 11 weeks. The event was designed to be an interactive environment that allowed the CRV story and vision to resonate with each attendee individually; the theme was “5,000 events for 5,000 people.”

In the 300,000-square-foot convention-center venue, an opening session featured comments from both employee leadership and the CEO on the company’s goals and mission. Then for the next three hours, employees moved through the “experience.” A 300-by-150-foot custom carpet anchored the space with three colored circles (replicating the CRV logo):

ORANGE CONVERSATION AND DIALOGUE CIRCLE – Employees could react to the CEO’s opening-session comments at one of 36 computer stations by completing a survey or asking questions of the CEO or other leadership. Questions and survey results were displayed in real time on overhead monitors. The circle also featured moderated town hall—style conversations.

Attendees used video kiosks to record group videos or to demonstrate individual commitment to the company by sharing “the best kept secret of the company” or their “next big idea.” The videos were then shown, and other guests could rate the group videos. A 16-foot-tall chandelier was the centerpiece for the area; it was composed of 1,200 acrylic discs, each screen printed with a photo of an employee. The pictured employees were from all levels and areas of the organization. The chandelier was created live at the event: For more than an hour, members of CRV’s leadership team added the photo discs to the fixture as it was slowly raised up to its position above the space.

PURPLE PATIENT CIRCLE – The third circle was created as a labyrinth with four rings, where employees could reflect on the company’s purpose. The outermost ring featured images of patients benefited by CRV devices and updates on their progress. Videos of patient success stories were played on monitors in the inner rings.

A separate “Club E” area shared information about employee benefits and clubs offered by Bos on Scientific. Attendees were also offered neck massages and healthy juices, served from an ice ar. Another area nearby repurposed elements of the company’s trade show booth. Salespeople and physicians at 27 product stations educated employees about CRV’s products.

At the closing session, the CEO responded to some of the questions posted in the conversation circle, and the most popular group videos were shown.

Share this...
In the News: Event Solutions
The Arrival of the Royal Wedding Party at Westminster Abbey

In the News: Wedding MBA

In the News: Wedding MBA