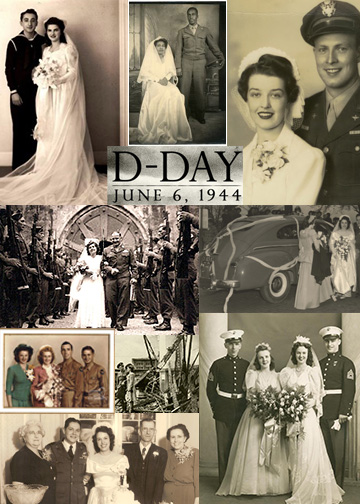 Last week marked the 70th Anniversary of the day that began the end of World War II. On June 6th 1944, the Allied invasion of Normandy in Operation Overlord took place, now termed D-Day! Allied forces made up of the United States, Great Britain and Canada joined together in what would be the largest seaborne invasion in history including 5,000 ships, 11,000 airplanes and over 150,000 servicemen. The operation began the invasion of German-occupied Western Europe, led to the restoration of the French Republic, and contributed to an Allied victory in World War II.

Today we honor them in memory of their service and take a look back at Military weddings during World War II. The 1940s saw an upswing in marriages. Marriage rates rose to 20% above pre-war levels. Men and women did marry, at home and abroad. Over a million wives followed their military husbands around the country even though they could not spend a lot of time with their husbands.

Many couples marrying during World War II had many of the same style of weddings we see today. From simple family gatherings to grand affairs; for most, it all depended on finances and how quickly they would be going into service.

The GI’s usually wore their uniforms and for women, wedding styles were dictated by the economic situation of the times. From simple “Court House” day dresses for those ascending the steps of a government office, brides usually wore a skirt and jacket with a pill box or wide brim hat with netting. Flowers were used as an accent to the ensemble as were white gloves. Popular options included large bouquets with 2″ or 3″ wide satin ribbon or a simple rose or single orchid corsage. Those lucky enough to wear a full-on wedding gown found fabrics in satin, lace or organza. Sleeves and high necklines were prevalent in design along with a fingertip or cathedral veil and long trains bringing elegance to the silhouette. Mothers and Fathers of the Bride and Groom usually wore their “Sunday Best” suit and day dress.

It’s interesting to look back on images of weddings during this time period and notice the automobiles used for a wedding. They didn’t rent limousines or fancy cars like today, many where lucky to own a car. So on the morning of the wedding one car was selected to carry the couple to the ceremony and the reception followed by the drive-through town honking their horns with trailing cans clanging behind them. The groom and best man usually spent the morning of the wedding washing and cleaning the car so it would be shiny and impressive followed by attaching crepe paper for decorations with paper bells if they could afford them.

Ceremonies mainly took place in the family’s church, courthouse, government office, homes and yes, even some in the ruins of their bombed-out cities where they may have met their war-time love. Decorations were simple; flowers in the altar area or candles with bows. Simple yet elegant surroundings for the times and those who married in ruins. It was quite the juxtaposition of love rising through the anger of the days.

Before you do anything, create a branded impression with a logo sign. We aren’t talking just a roll-up banner. With new...

Everyone wants to be ‘POPULAR’, but looking popular and being popular are two entirely different things. Some...

The Wedding Guys team was so excited to host brides, grooms, mothers of the brides, and more at the September 2021 Twin...