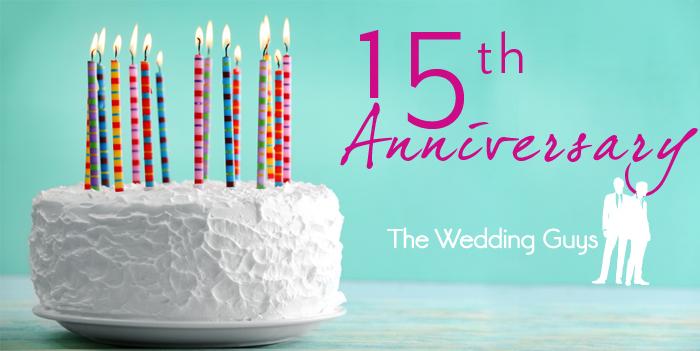 This August we celebrate 15 years of a great history commemorating the ground-breaking achievements that have brought The Wedding Guys much success.
In the summer of 2001, Matthew Trettel and Bruce Vassar joined forces in roles as Vice-President and Account Executive at Twin City Bridal Association. From the beginning there was undeniable synergy between this team. In fact, the moniker ‘The Wedding Guys’ was first coined by Don Jensen, owner of Linen Effects, who identified something special in this dynamic duo.
Understanding a need to elevate the wedding market, they left Twin City Bridal Association to develop Elite 100 Weddings Couture in 2002, producing The Wedding Gala and The Wedding Planner. The Wedding Gala was the nation’s first luxury bridal event bringing six international bridal gown designers to Minneapolis for a black-tie soiree.
In 2003, they sold Elite 100 Weddings Couture to Twin City Bridal Association, merging their developments into The Wedding Fair and The Wedding Directory. Their tenure at Twin City Bridal Association saw the redevelopment of The Wedding Directory, providing trend forward editorial and styled shoots, a decade before these would be popularized. With their complete redesign of The Wedding Fair, they first introduced experiential marketing, creating an immersive experience with the Ceremony Experience and Reception Rotunda. Their keen sense of the luxury market provided the basis for the introduction of Weddings Couture, a luxury boutique setting at The Wedding Fair which would feature such impressive brands as Neiman Marcus and Monique Lhuillier.
In 2004 they introduced Trend Weddings, a contest to win a $100,000 dream wedding that would be featured throughout the media.

In 2005 they partnered with the local wedding community to launch the Love A Cure Breast Cancer Benefit in which 100% of the proceeds from both ticket sales and silent auction items went directly to Open Arms of Minnesota. Over $120,000 was raised over 4 years to support Open Arms’ expansion to serve meals to breast cancer patients.

In 2008 The Wedding Guys developed the ICON Awards, honoring excellence in the Twin Cities wedding community. In 2008 they also received an award of their own; their first international award from The International Special Events Society, to-date earning 7 awards from this prestigious organization.

In 2009, The Wedding Guys launched both UNVEILED – The Ultimate Wedding Planning Event in Dallas, Texas and The TrendSpot Press Fashion Show for New York Bridal Fashion Week. Both events gave The Wedding Guys the latitude to broaden their horizons and their International reputation. By 2010 they expanded UNVEILED to Atlanta, Georgia.

When Twin City Bridal Association terminated The Wedding Guys contract in 2010 to take The Wedding Fair and Wedding Directory in a different direction, The Wedding Guys were excited with the opportunity to finally bring all that they had developed with UNVEILED to the Twin Cities market.

In 2011 The Wedding Guys saw expansive growth. In April 2011 they traveled to London to cover the Royal Wedding for local and international media including Fox News. In November they launched UNVEILED in Minneapolis and by December they were filming their first episode of TLC’s Say Yes to the Dress spin-off series Randy to the Rescue, produced in conjunction with Half Yard Productions.

As the second season of Randy to the Rescue was wrapping up in 2013, The Wedding Guys launched the new expo-style event, The Twin Cities Bridal Show in Saint Paul, Minnesota and started development on their newest publication, The Wedding Trend Look Book which would debut in January 2014.

In 2015 The Wedding Guys began expanding their speaking appearances including The Special Event Conference and Congreso de Bodus in Merida, Mexico. They expanded their business offerings introducing Chrom Creative, their brand agency, offering marketing development, media buying and business consulting. In November 2015 they launched UNVEILED 2.0 in Minneapolis, doubling the footprint of the show.

In May 2016 The Wedding Guys launched UNVEILED-Rochester with the first show set for January 2017. A month later they launched their IGNITE – Business Strategy Summit to assist their clients with top-tier education from internationally recognized speakers.

In celebration of a decade and a half of excellence, The Wedding Guys’ team will be celebrating their 15th anniversary at Wedding Guys Wednesday on August 17th. Please join them in celebrating an amazing history and all the exciting things yet to come.

The time has finally arrived and we are counting down the days to the launch of our new 2014 Wedding Trend Look Book being...

Everyone wants to be ‘POPULAR’, but looking popular and being popular are two entirely different things. Some...

This August we celebrate 15 years of a great history commemorating the ground-breaking achievements that have...