The wedding of Susan + Stephen evoked an atmosphere that was classic, yet city chic. Self-described as ‘foodies’ the culinary experience was a priority. Their love for the engagement of a crafted cocktail, created by a master mixologist gave us just the inspiration in creating their signature chandelier wedding theme. 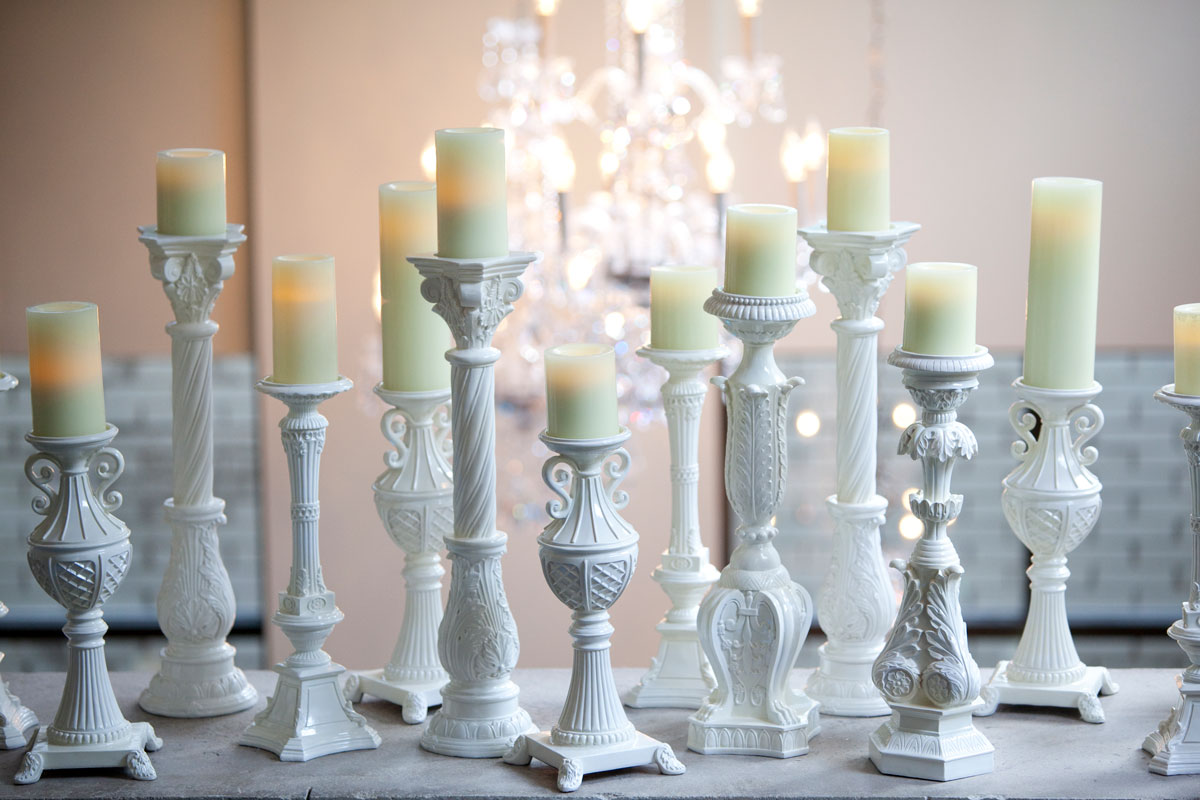 Wanting to create a diversion from the sit-down dinner the guests would likely expect, we wanted the guests to be wowed by both the décor and the culinary experience. The couple enjoyed dining out, so we decided to bring a restaurant-style culinary experience to their wedding day and we were challenged with the task of finding just the right location. We wanted to customize a menu that would allow guests to try new things, all on their own. Our solution was to buy out a restaurant for the evening. The perfect venue featured two levels and provided us with ample opportunity to augment the restaurant decor with signature elements and statement pieces to enhance the space.

The entrance to the restaurant offered a great sense of arrival so we only needed to enhance it with a statement piece of stylized floral flowing from clear cylinders. We utilized interesting architectural elements like the cement beam, at left, to hold a collection of classic candlesticks that mimicked the amber glow of the chandeliers. 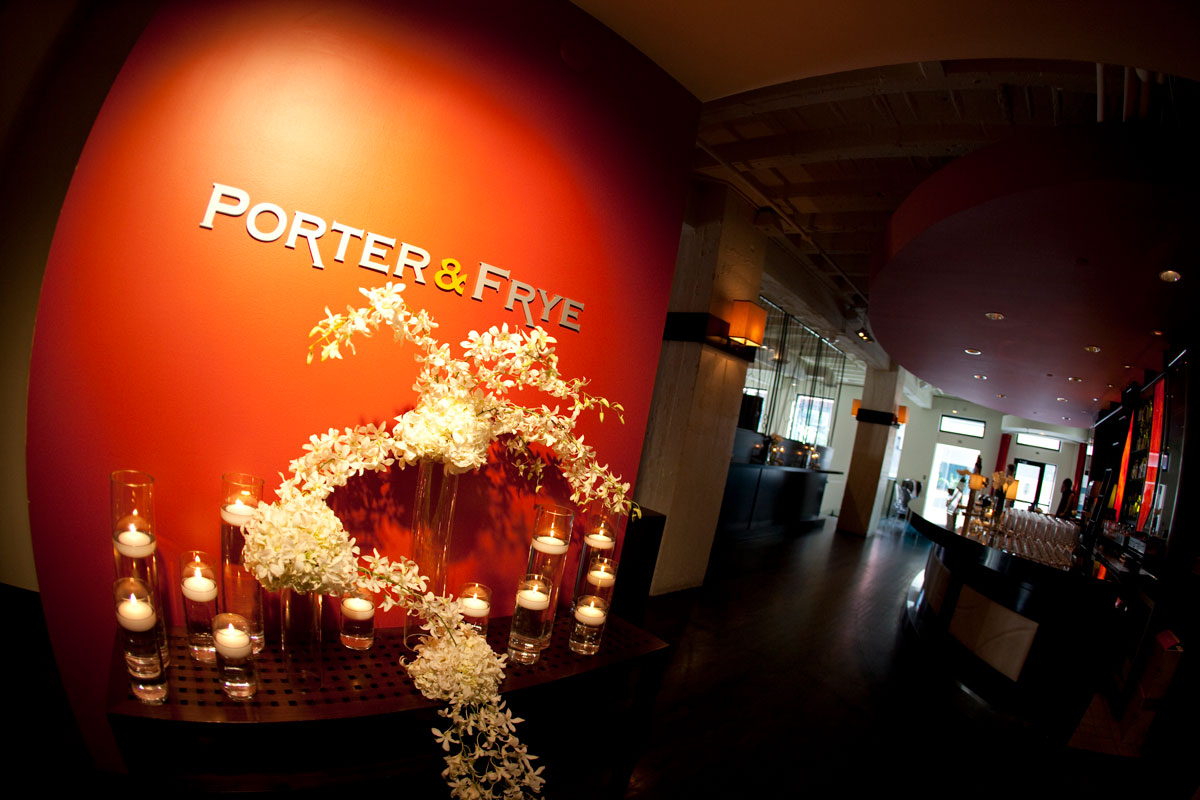 We worked with tones of white, silver, and black as primary shades, adding in teal and orange to accent and give a pop of trend color. The cocktail area allowed for clear acrylic seating and contemporary tables where we applied vinyl graphics with the names Susan and Stephen on the tabletops. 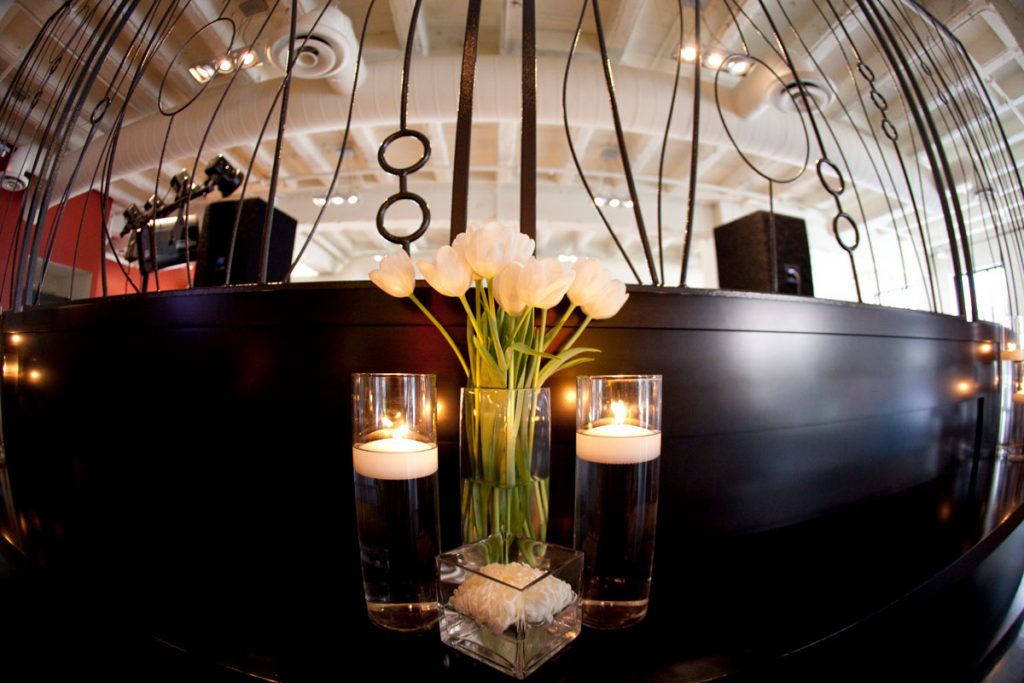 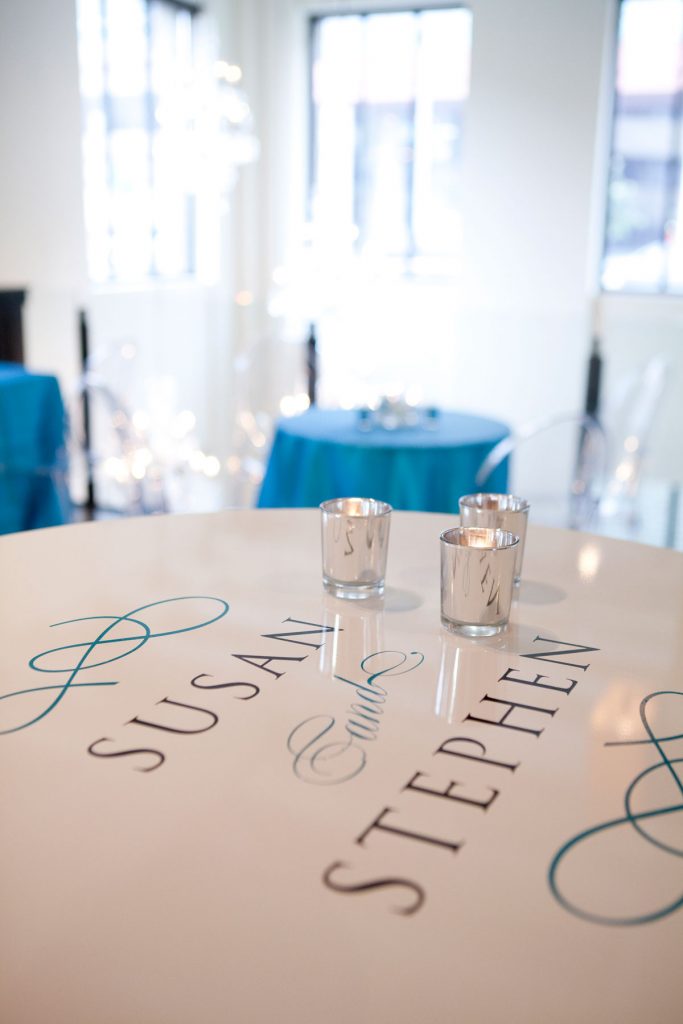 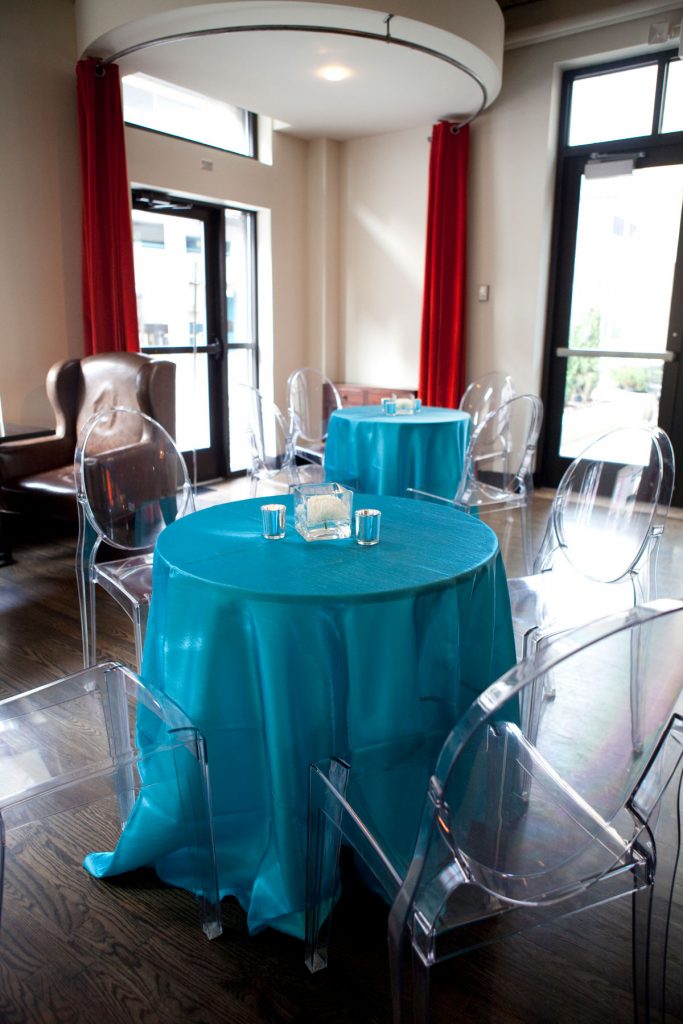 The impactful statement of chandeliers echoed the sophisticated style of the couple and it was as if they sang to us on the initial venue tour. We incorporated the chandelier throughout the event with a modernized graphic treatment. Even the mixologist’s menu featured the stylized chandelier graphic that was used for the invitation, on the mirrored bar, and on the rugs we chose. 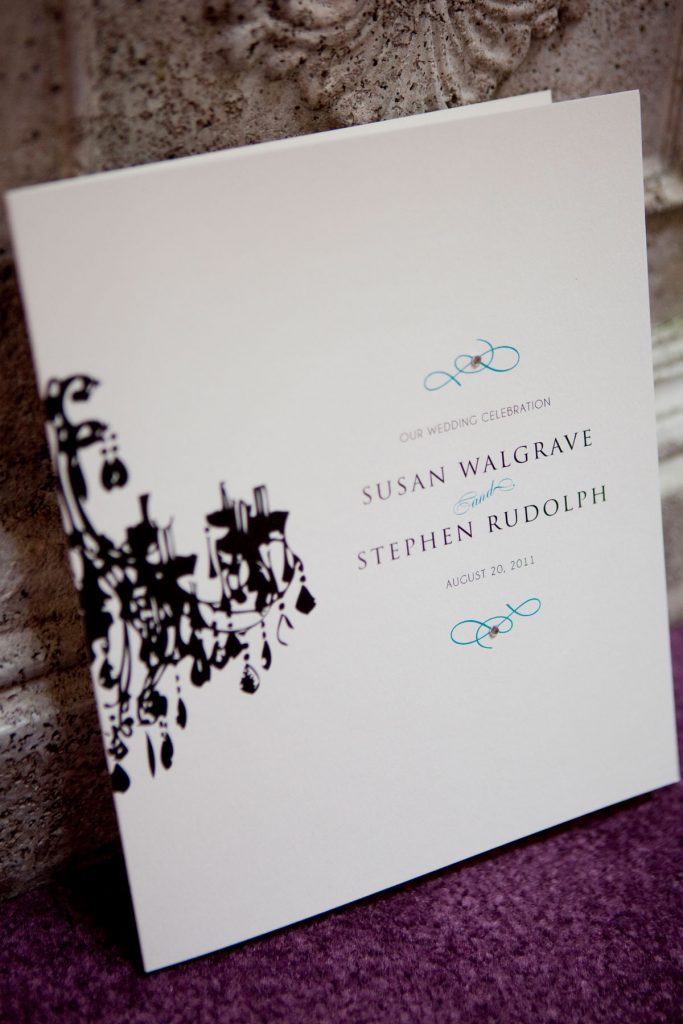 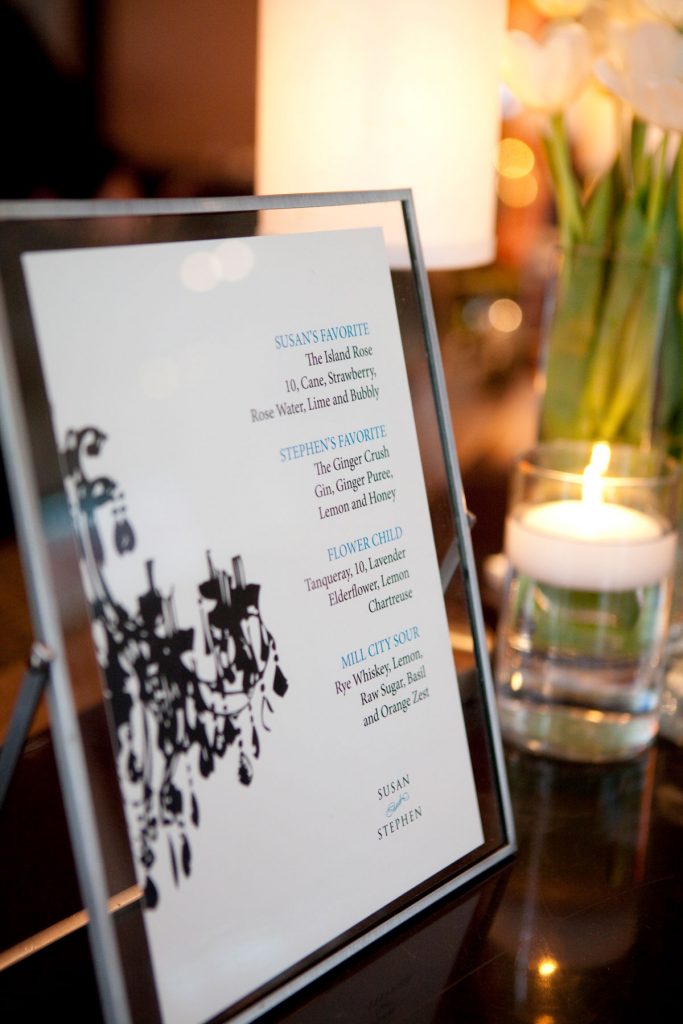 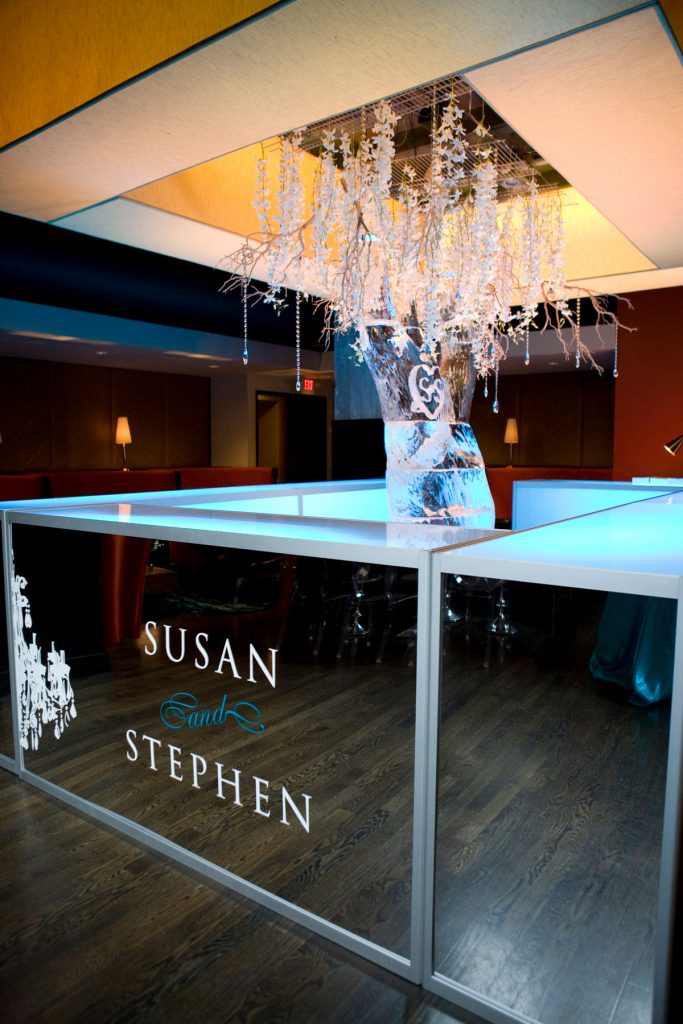 The staircase provided a sneak peek into the dinner reception area below, but did not allow guests to see the main parts of the reception setting. 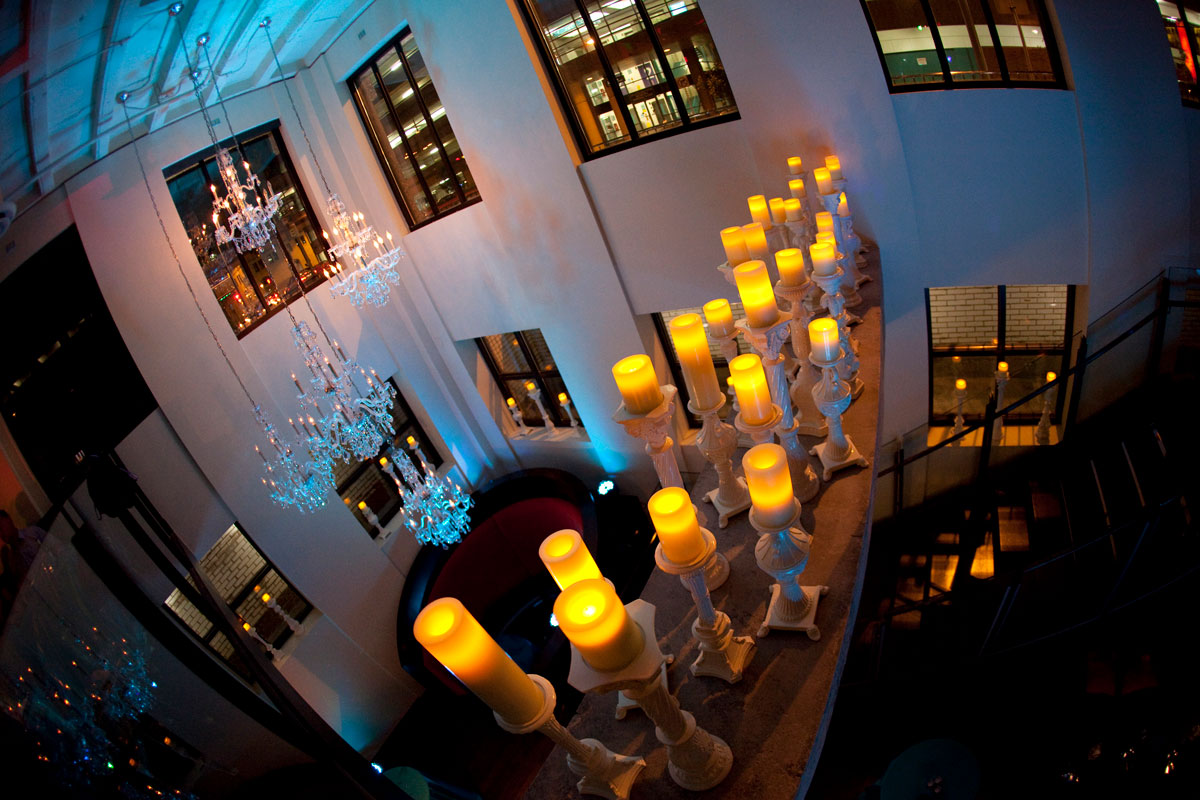 As the cocktail reception ended, the guests were welcomed to the lower level. They passed by the four-foot-tall cake which was covered in orchids and extended up into the chandelier. This was one of the statement pieces we were most excited about as every detail had to be meticulously planned, including the exact height of the cake. The last crystal on the chandelier almost touched the cake. 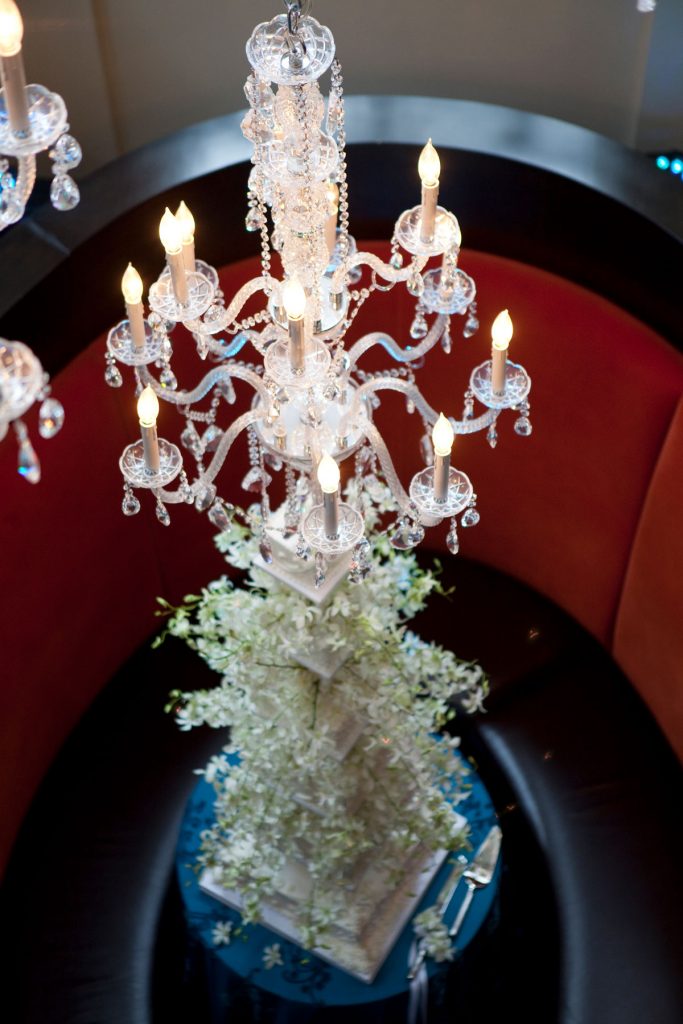 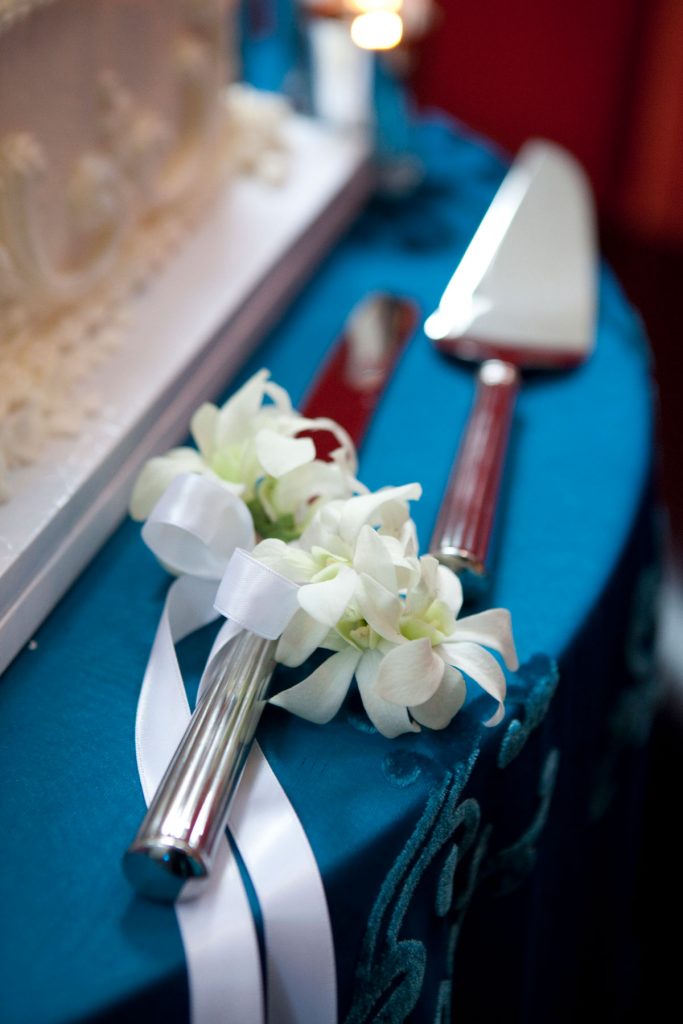 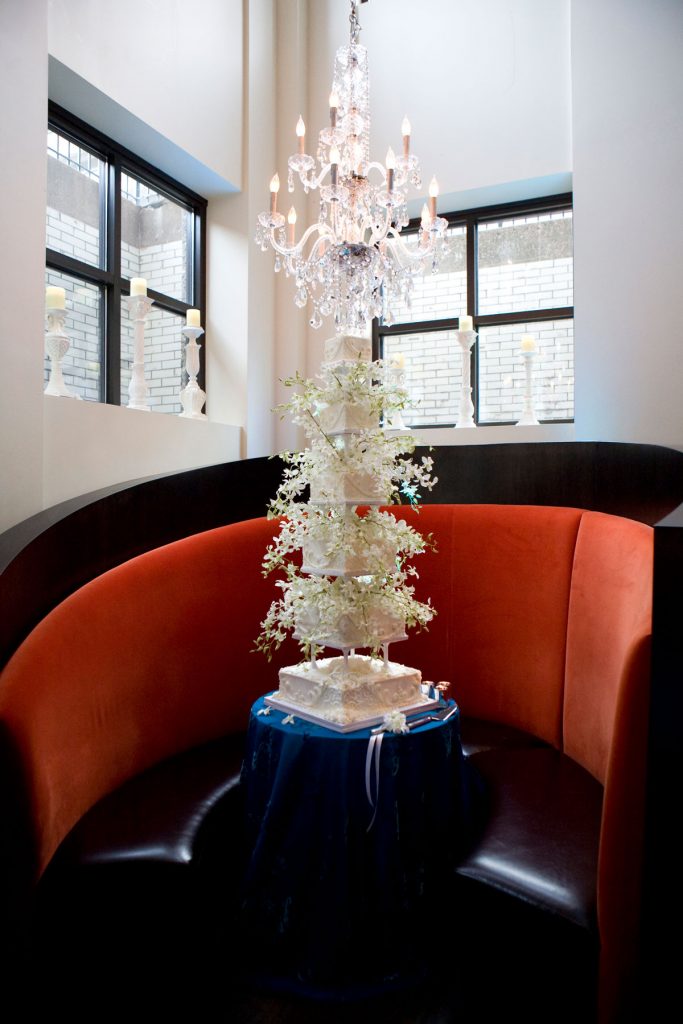 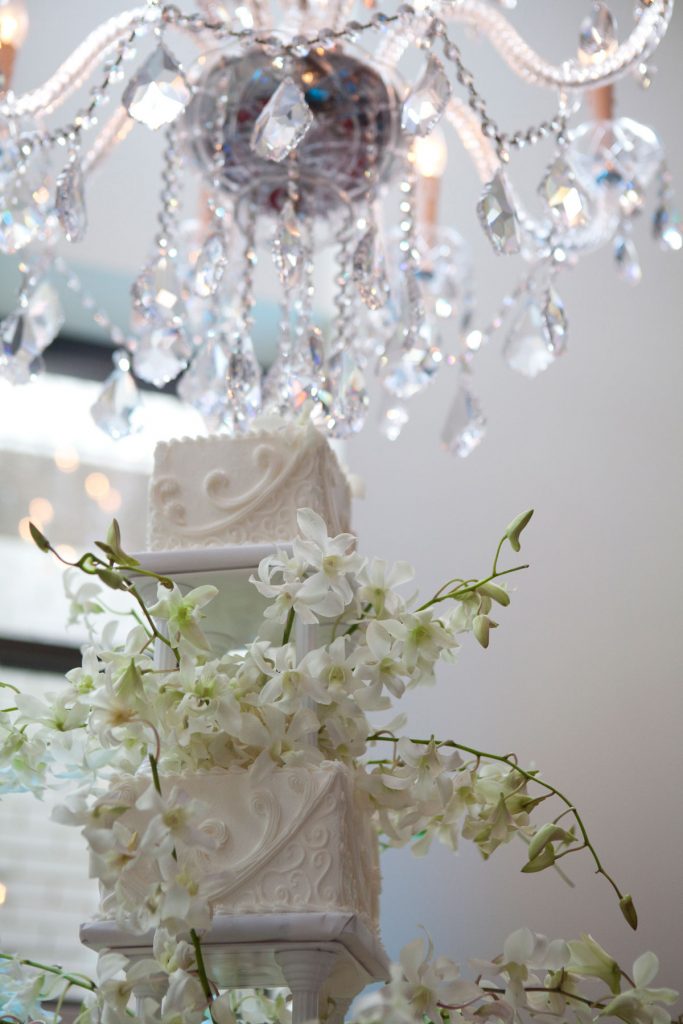 The overall vibe was an experience of culinary taste that told the couple’s story. It gave their guests the opportunity to try something they normally wouldn’t eat, like sushi. It was a mix of seating and standing allowing for easy access to the many different food stations. The menu was eclectic with varied comfort foods like macaroni and cheese lollipops to the more sophisticated beef tenderloin. It was the sushi action stations, however, that became a hub of excitement. 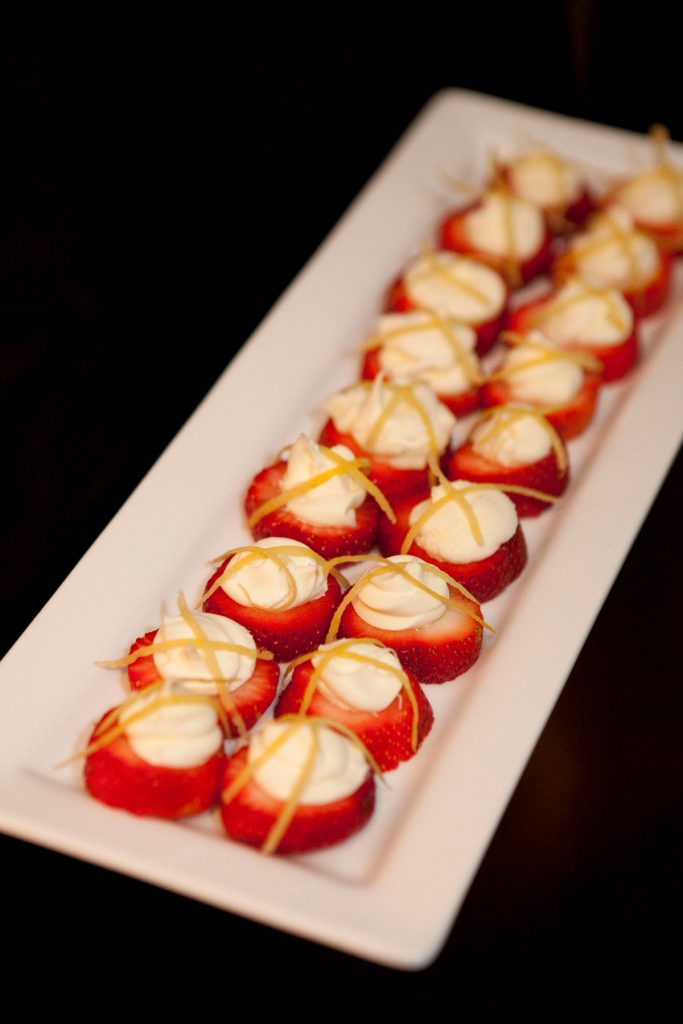 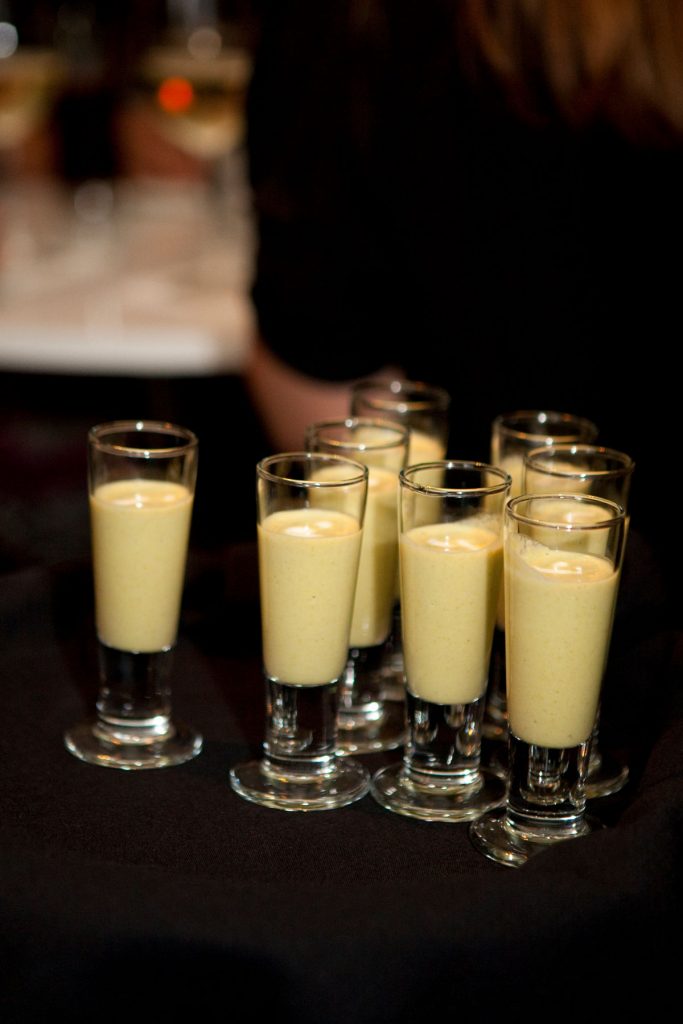 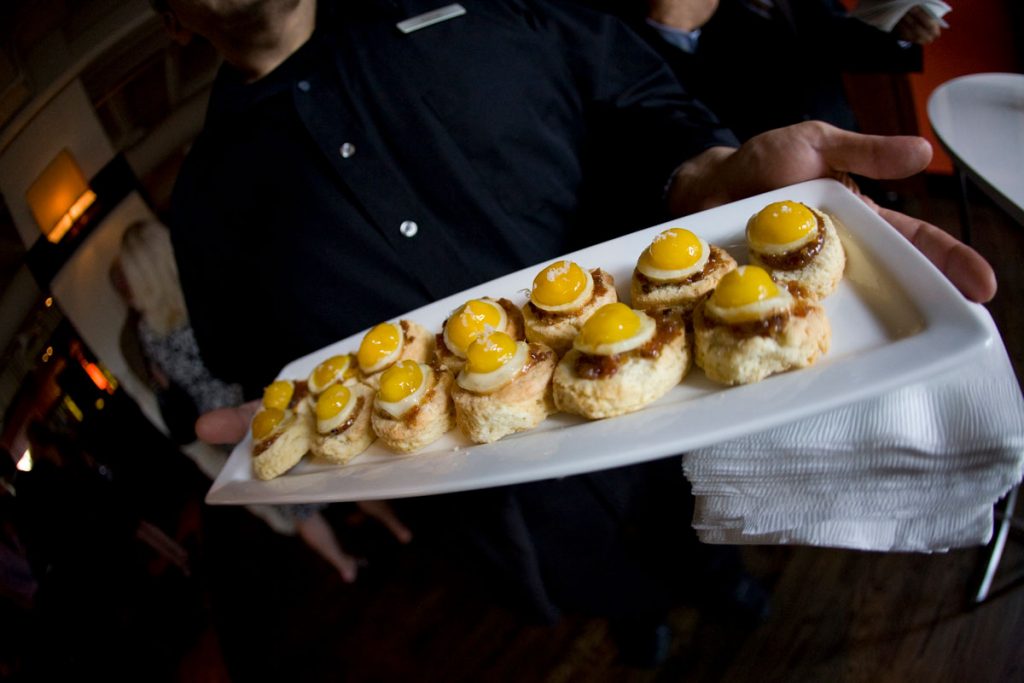 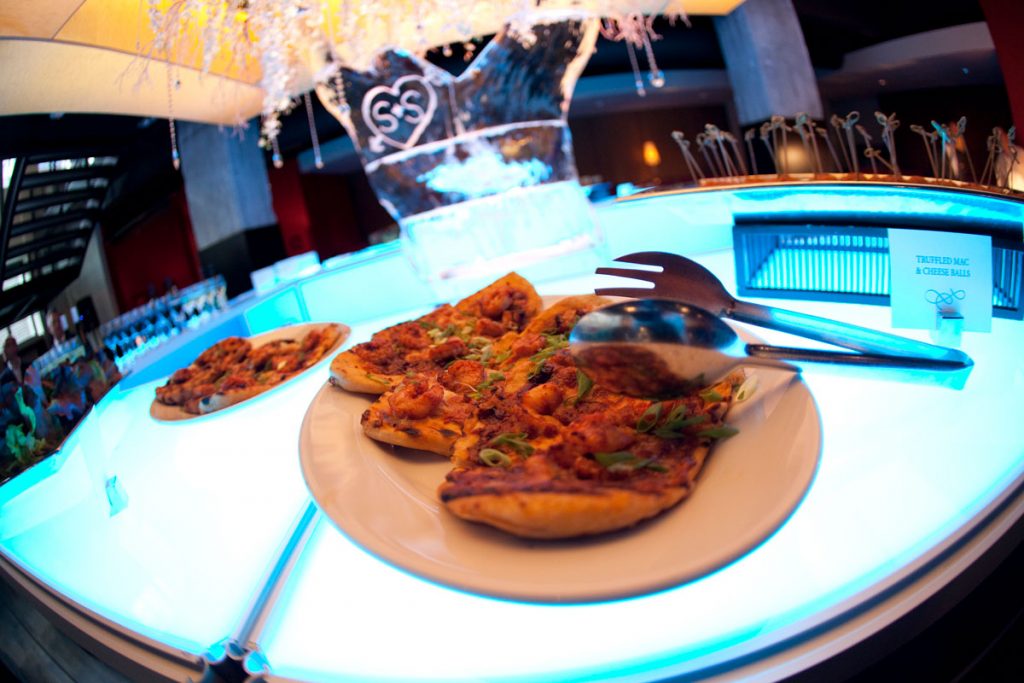 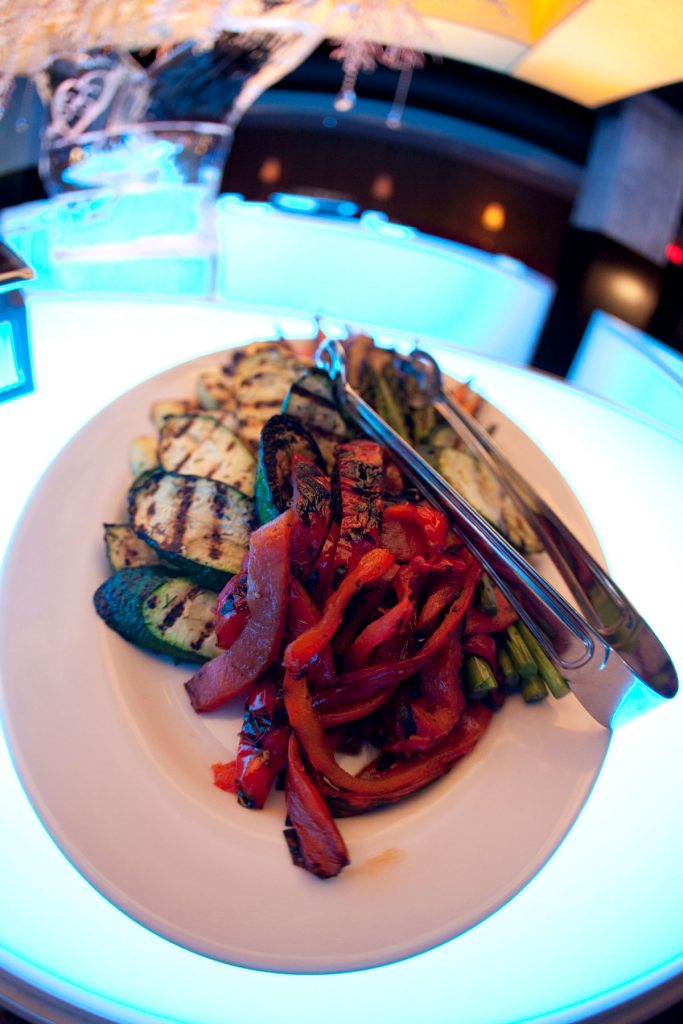 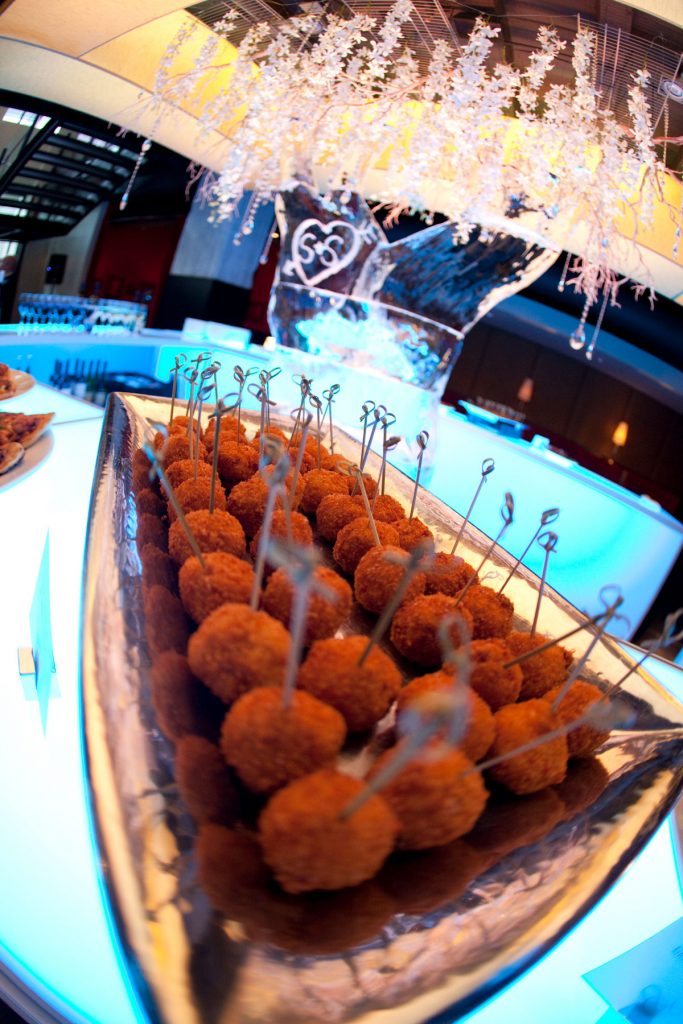 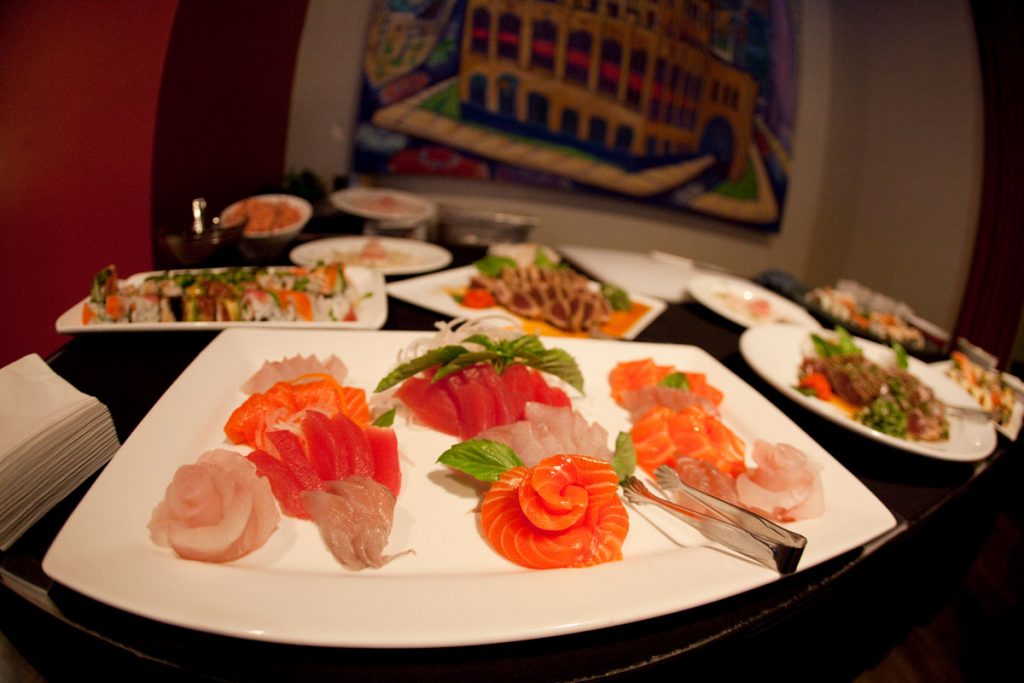 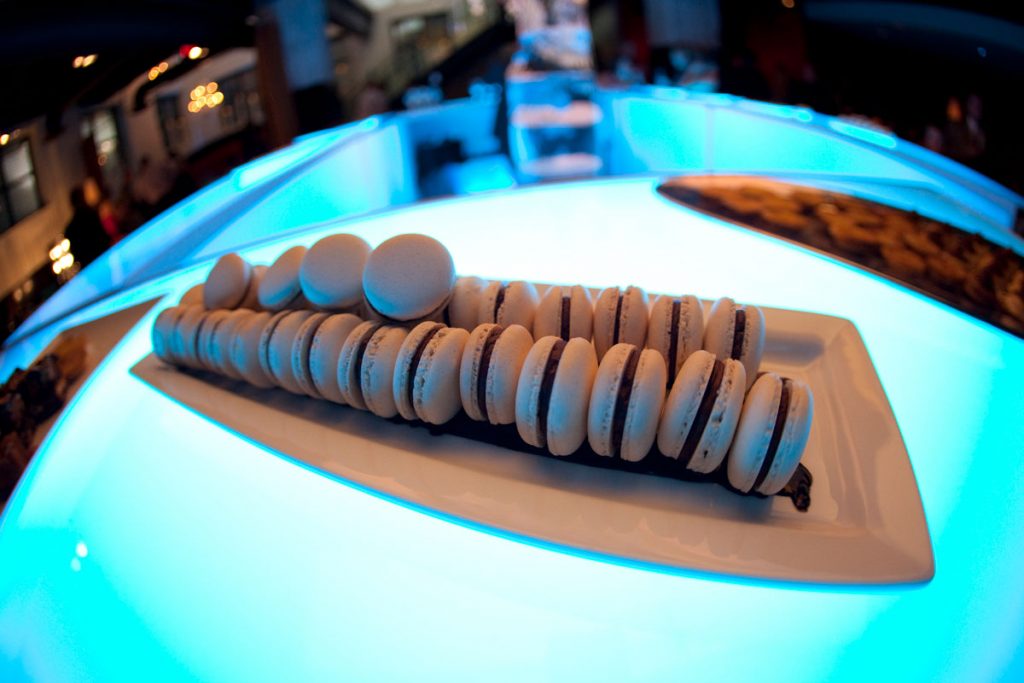 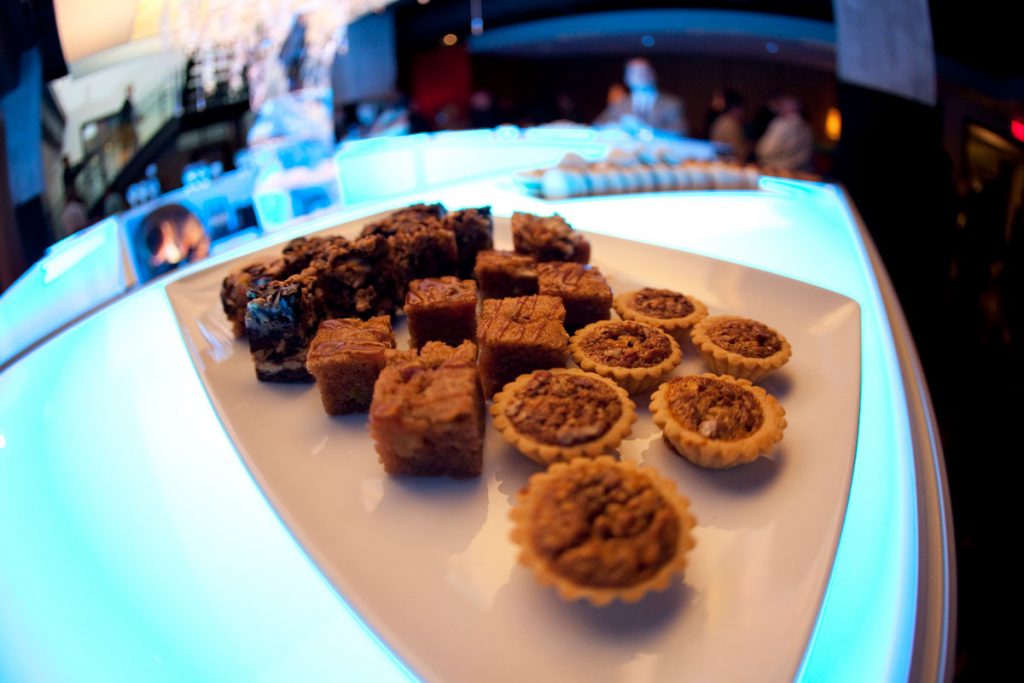 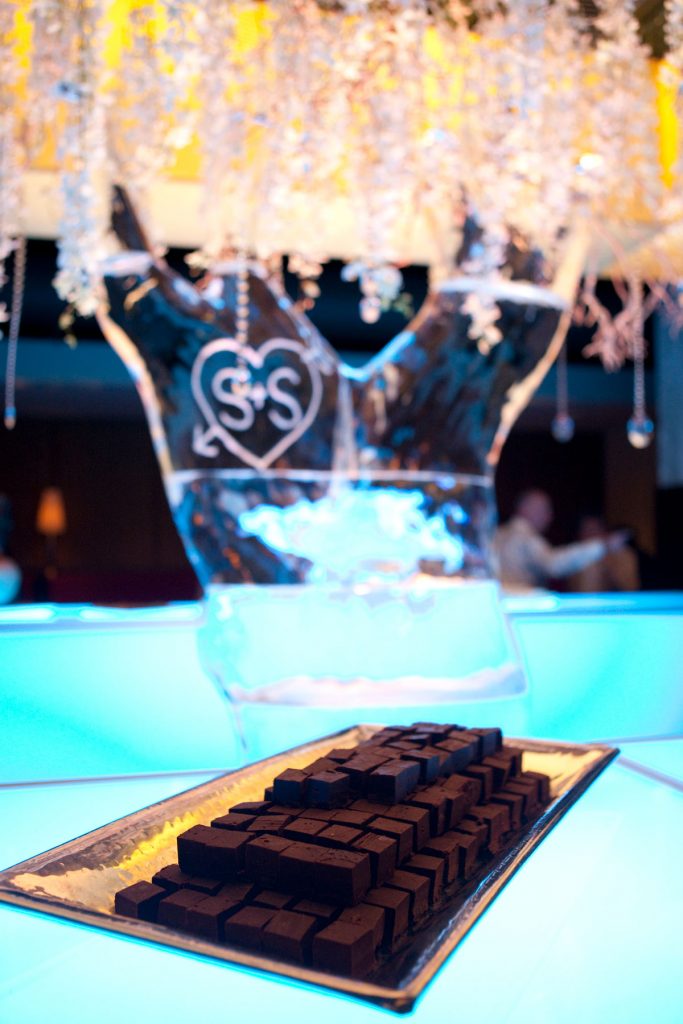 The mixology bar enticed guests with four designer drinks specially designed for the couple, taking into account the favorite flavors they enjoyed while dining out. We enhanced the restaurant’s built-in bar with simple white tulips which gave a contrast to the orange and yellow bar back, beckoning guests to say “I’ll have another”. 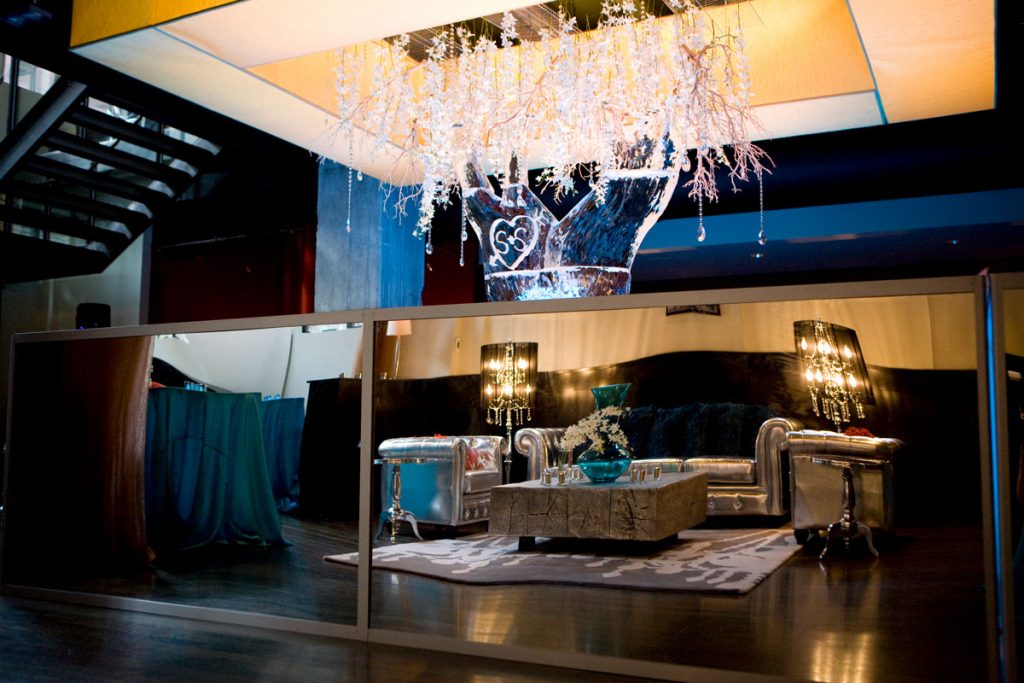 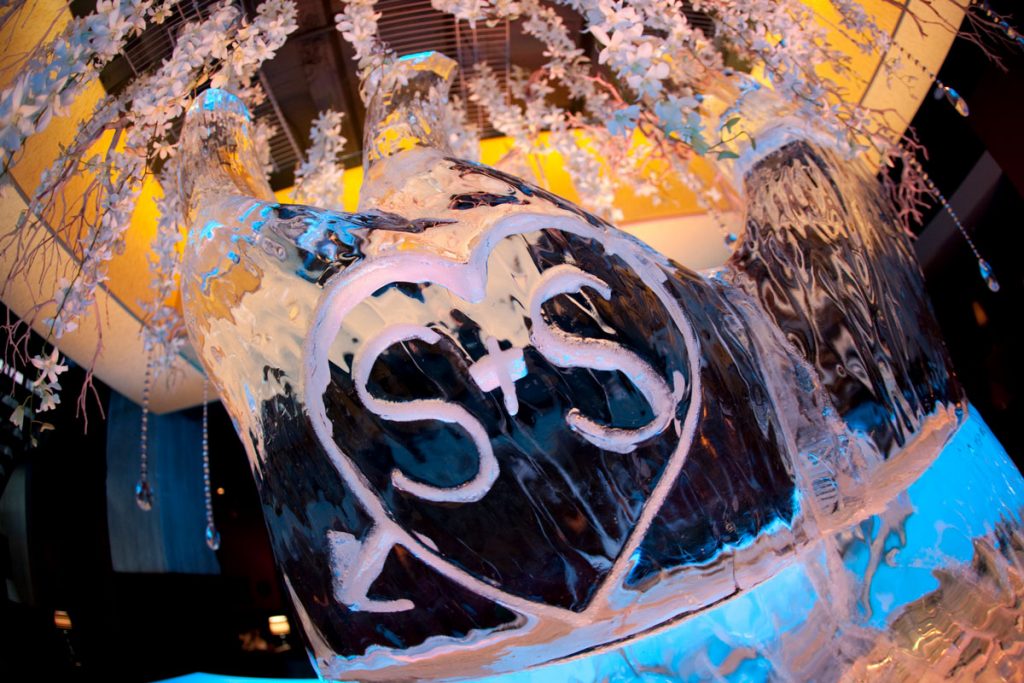 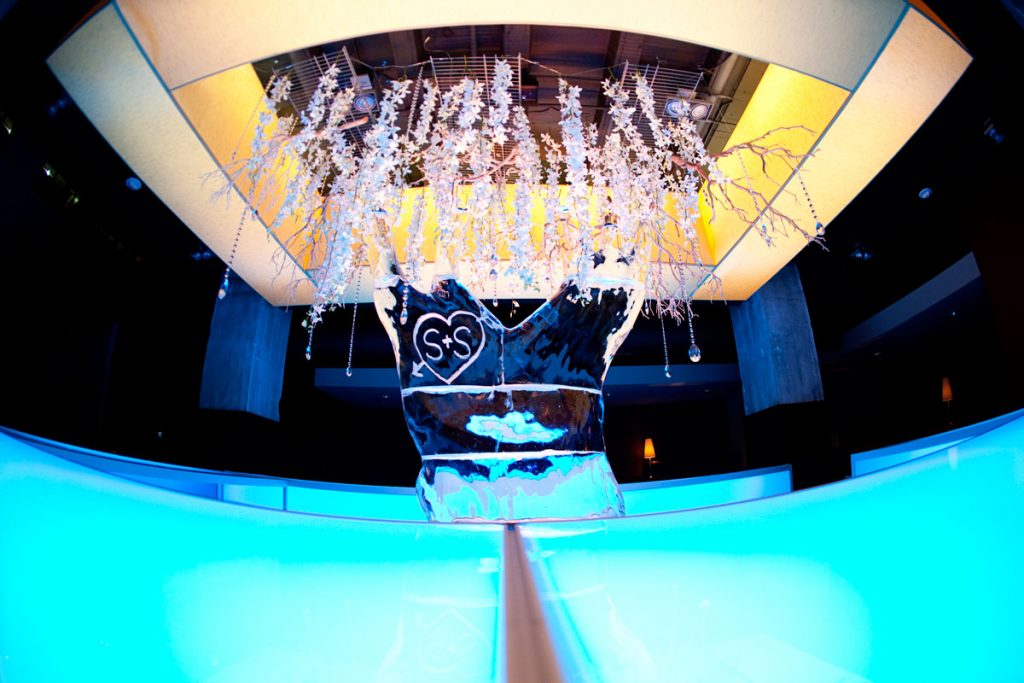 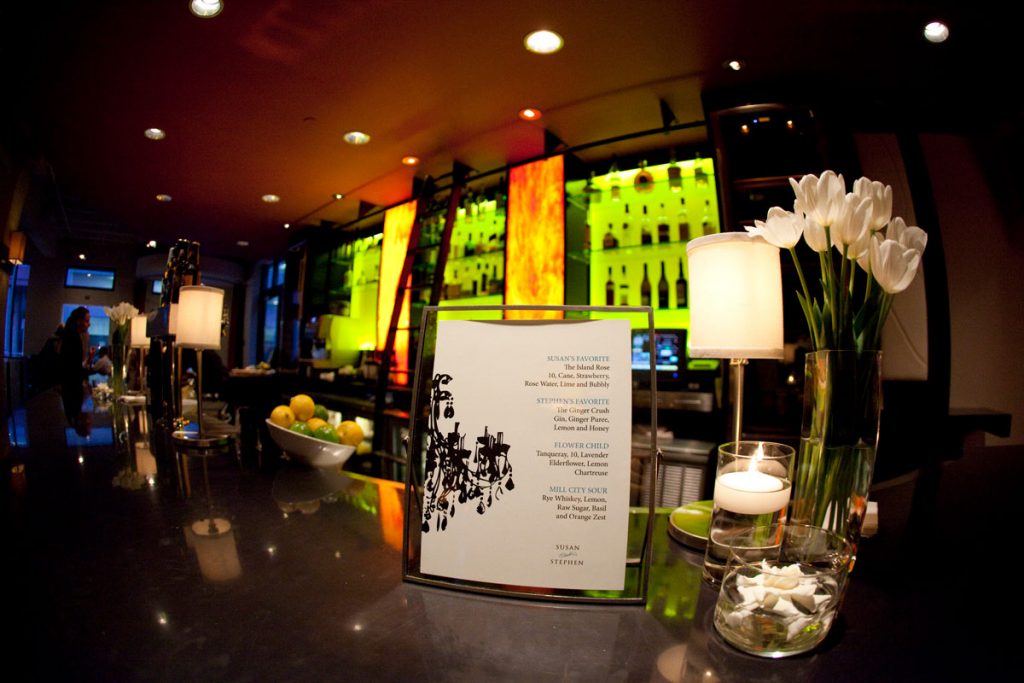 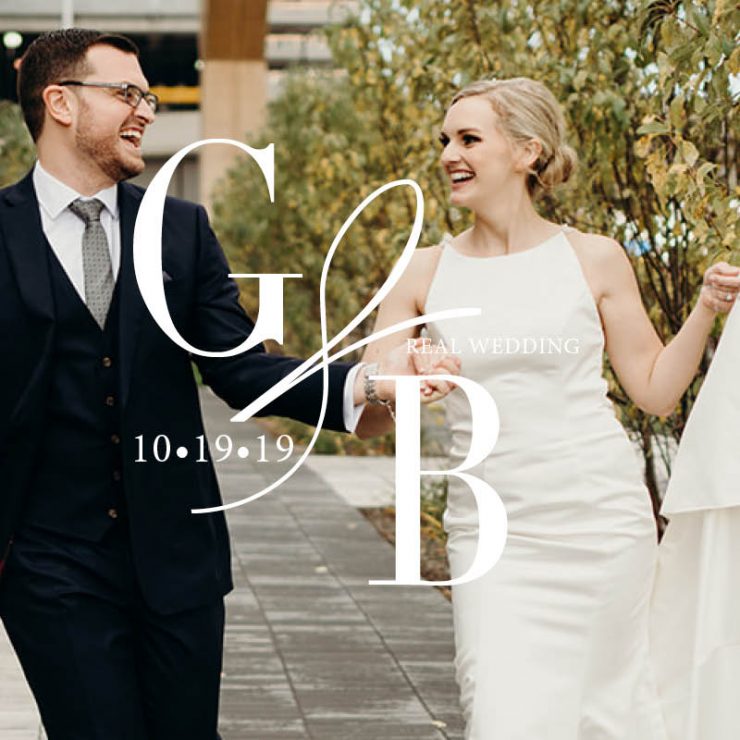 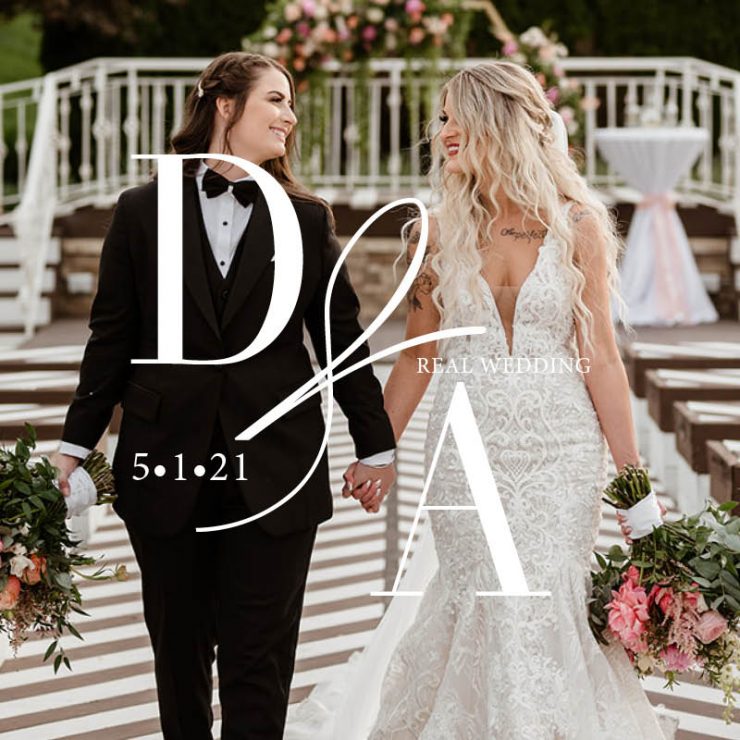 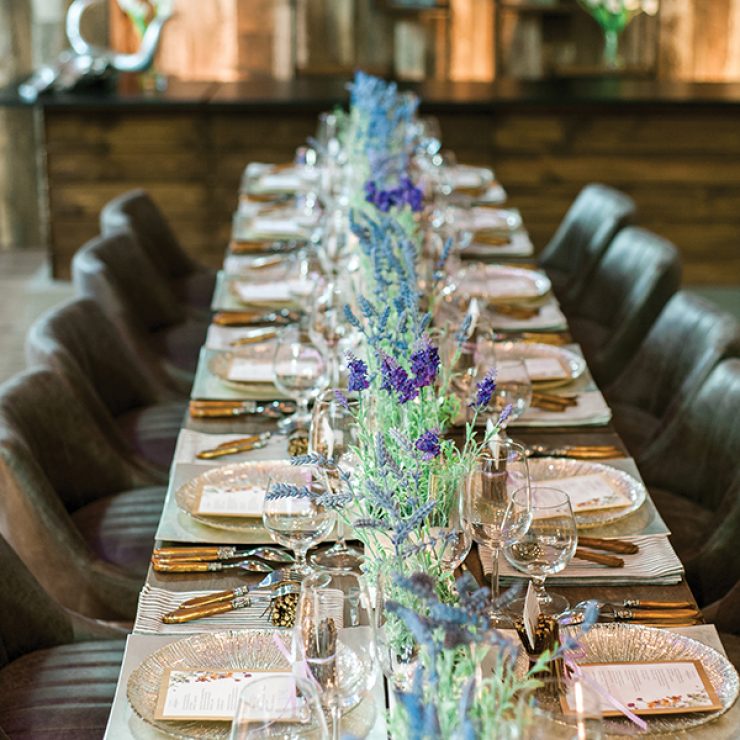