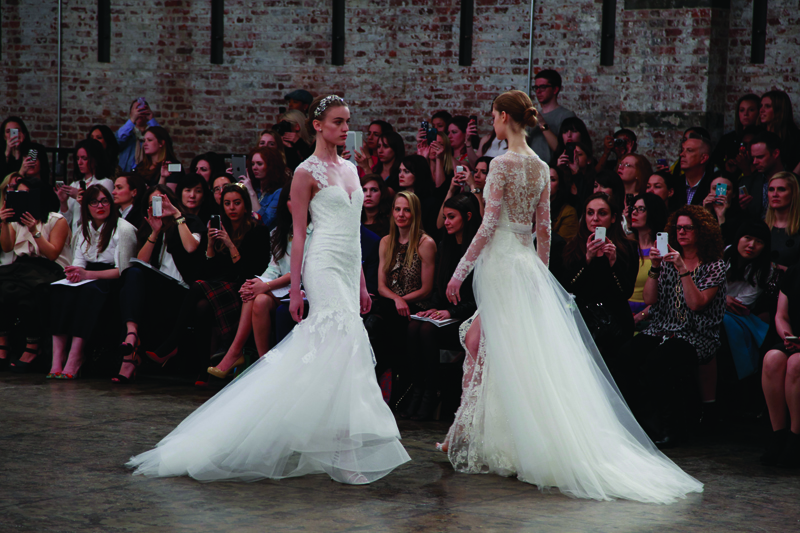 For nearly a decade and a half, we’ve been thrilled to be the first to bring you the freshest looks directly from New York Bridal Fashion Week. Twice a year we travel to New York City for the Couture Bridal Market where we preview the latest bridal fashions hot off the runway.  It’s a sea of fabrics parading in front of you and the cameras flashing, yes it can be just like Devil Wears Prada!

For us, it’s also our chance to see our designer friends, catch up on their latest creations, and have a few moments of laughter.

Everyone wants the front row and people stand in the runway until the show starts in order to “be seen”.  The celebrities are all in force like Randy Fenoli – Say Yes To The Dress, Preston Bailey – famous floral designer, Colin Cowie – lifestyle & event designer. And let’s be honest, no fashion show starts until Darci Miller, Editor of Martha Stewart Weddings and our good friends from Kleinfeld Manhatten “Say Yes To The Dress”, Mara and Ronnie take their seats!

Tag along as we travel to New York this weekend for a sneak peek of what will be gracing the wedding aisles for Fall 2017 collections.  Here are some of the designers we will be watching: Ines Di Santo, Isabelle Armstrong, Francesca Miranda, Berta, Romona Keveza, John Paul Ataker, Alessandro Angelozzi, Eve of Milady, Mac Duggal, JLM Couture, Pronovias and Rosa Clara.  Twelve designers in a day and a half, not so bad for a fast trip to New York.

We start bright and early at 8 AM and go non-stop until late in the evening; from the private showings to the runway shows and then an evening of glamorous parties – truly there isn’t anything like the excitement of Bridal Market. We walk from one end of Manhattan to the other and hop cabs constantly.  When one show is done everyone rushes to catch a cab while doing social media trying to be the first on the web with the latest look from the designer. The models flit from one show to another and sometimes we let them take our cab as we know the show can’t start until they are ready with hair and makeup.  It’s always exciting to run all over New York City – Oh the Glamour of Couture Bridal Fashion Week.

For us, it’s also our chance to see our designer friends, catch up on their latest creations and in some instances (thanks, Heidi Elnora) to just kick back and have a few moments of laughter.  So join us as we take you along on this fantastic journey. In the meantime, enjoy a look at our 14 years of adventures. 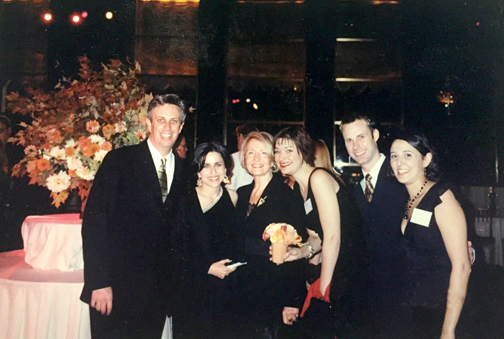 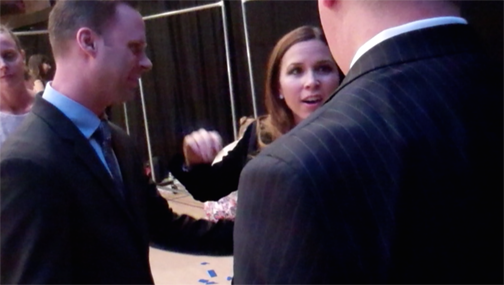 The Wedding Guys back stage with Monique Lhuillier 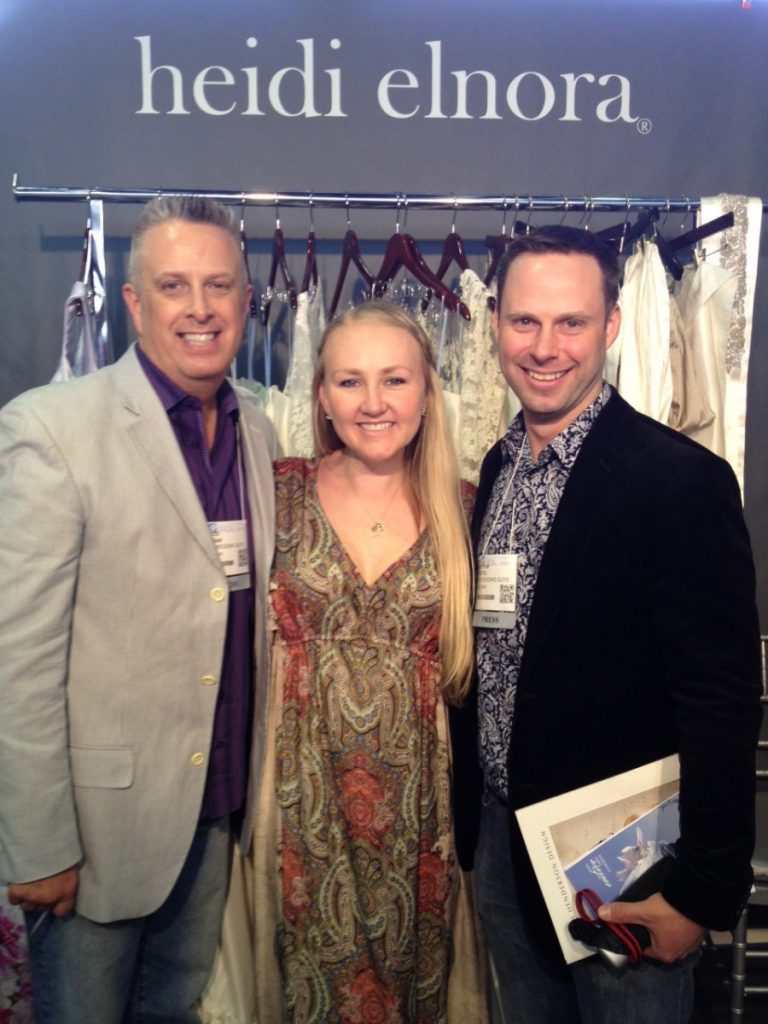 The Wedding Guys with friend and designer Heidi Elnora 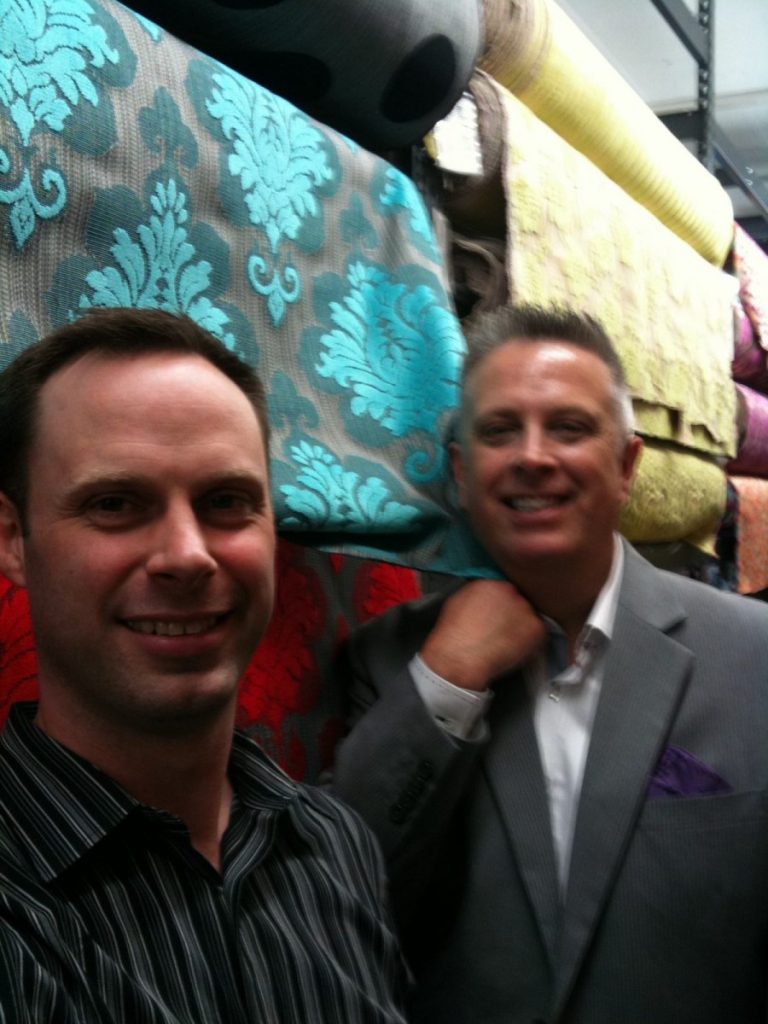 A quick stop at Mood between fashion shows. Watch for this fabric used as an aisle runner!

Since Berta hit the runway scene five seasons ago introducing the flowing cape as its signature (besides the see-thru skirts)...

Fall Wedding Trends Fall into the new trends and get valuable insight from The Wedding Guys, Matthew Trettel and Bruce...

Romona Keveza has become an icon in the bridal fashion industry. Not only because her gowns are gorgeous, but also because...