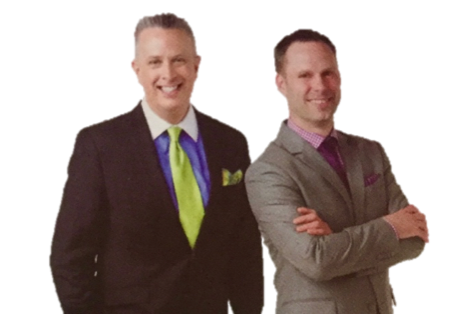 With nearly twenty years of experience in the event industry. Matthew Trettel is regarded as a premier designer and producer in the wedding industry. Trettel served in the capacity of Vice-President, then General Manager of Twin City Bridal Association where he oversaw all business activities that included the rolls of Executive Producer of The Wedding Fair and Executive Editor of The Wedding Directory. He was the Co-founder and President of Elite 100 Weddings Couture, which would later become The Wedding Guys, Inc. Trettel has served on the board of directors for Bridal Show Producers International as Co-director and as President of the Minneapolis-St. Paul Chapter of the International Special Event Society (ISES) and International MarCom Committee Chair for ISES.

Bruce Vassar is highly respected internationally for his insight into weddings and marketing. media and public relations, including thirty years in the special events industry including visual merchandising and promotion in the bridal fashion industry. His truly authentic passion for everything bridal has awarded him numerous accolades and the world-renowned title as one of The Wedding Guys. As a fashion blogger during NYC Couture Bridal Market he is garnered by designers. He has also coproduced TLC’s Randy To The Rescue – with Randy Fenoli — for two seasons. He also serves on many non-profit organizations’ Board of Directors including NACE and is actively involved with the Miss America organization.

Share this...
Vendor of the Week: Savvi Formalwear
THE WEDDING GUYS PARTNER WITH ROCHESTER MAGAZINE

It’s that time of year when the majority of our clients (especially the corporate businesses) are preparing their...

Are you looking for some inspiration or a new design idea?? Check out what interior trends are currently booming in the...

As an integral part of our twice-annual trip to New York City for Couture Bridal Market we are always on the lookout for...