When designers from the 1930’s Hollywood’s Golden Age, like William Haines and Dorothy Draper, encouraged West Coast film stars to decorate their home with overtones of glitz and glamour, a new design style emerged. The 1930’s Hollywood Regency style was a favorite of celebrities ranging from actress Joan Crawford to the future First Lady, Nancy Reagan. Hollywood Regency design, however, is not a relic of the past. The over-the-top style is not just for the rich and famous; a modern version is surging in popularity, fueled by designers who entertain the luxury of opulence and indulgence. 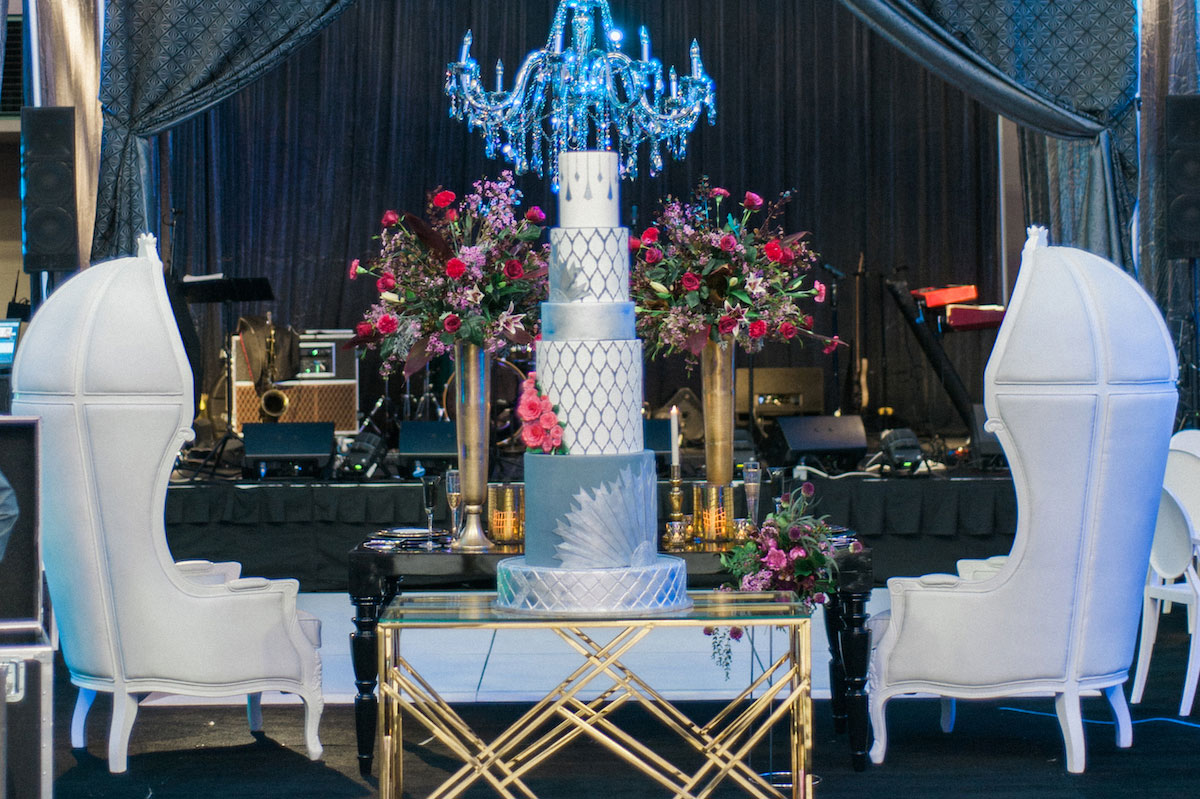 But don’t worry, because Hollywood Regency style is within reach for even the most budget-minded couple planning their wedding. In the highlight of lacquer finishes, bright golds, and silvers accented by antiques, furs, and satins, opulence comes together to create a romantic look we call: REGENCY. The key fundamental of Regency is that it’s all about the details, but they need to be bold in statement.

The wonderful bold graphic fabrics, fringe on lampshades, and chandeliers with crystals become a great inspiration, as did mirrored furniture. The dramatic pattern details can be incorporated in elements from the aisle runner to the graphic Moroccan pattern on the wedding cake. 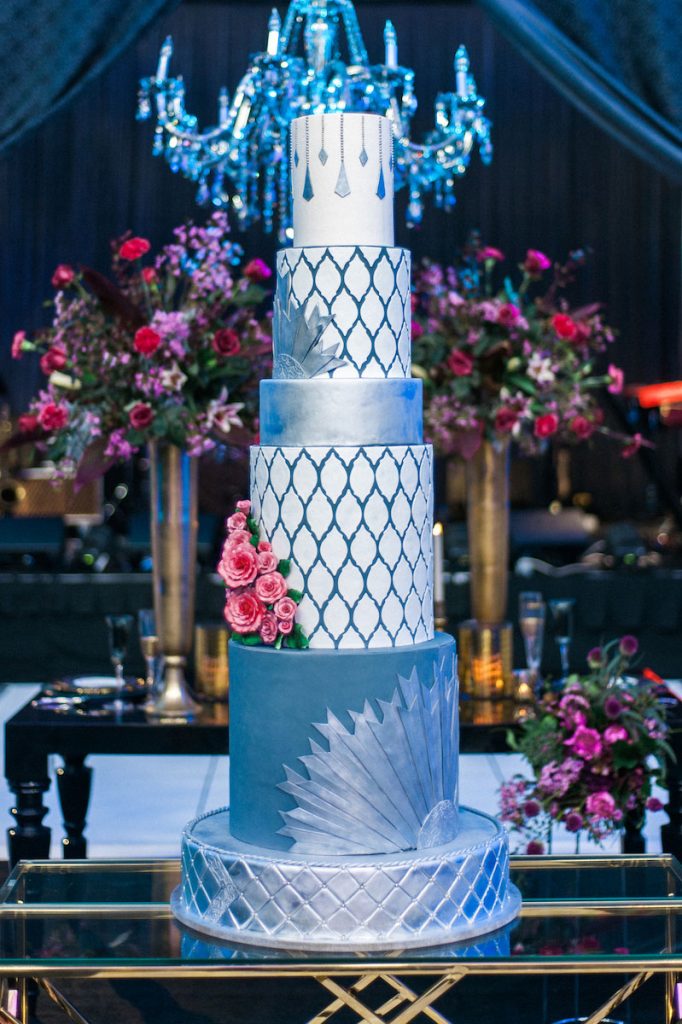 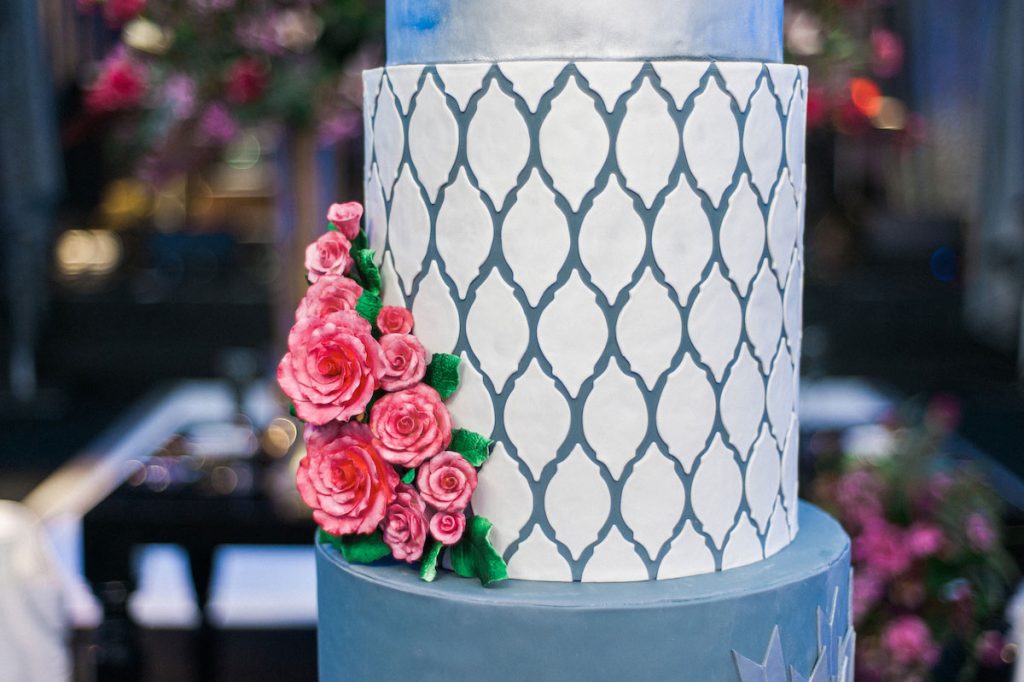 In the era when Hollywood Regency evolved, the luxury lifestyle was the important personification. Adding showy elements into a decorating scheme gives any reception the sense of scale and glamour that Hollywood designers of the era strived for. We used a black lacquer duet table flanked by two white leather coronation chairs reminiscent of something you might find on a Hollywood set. 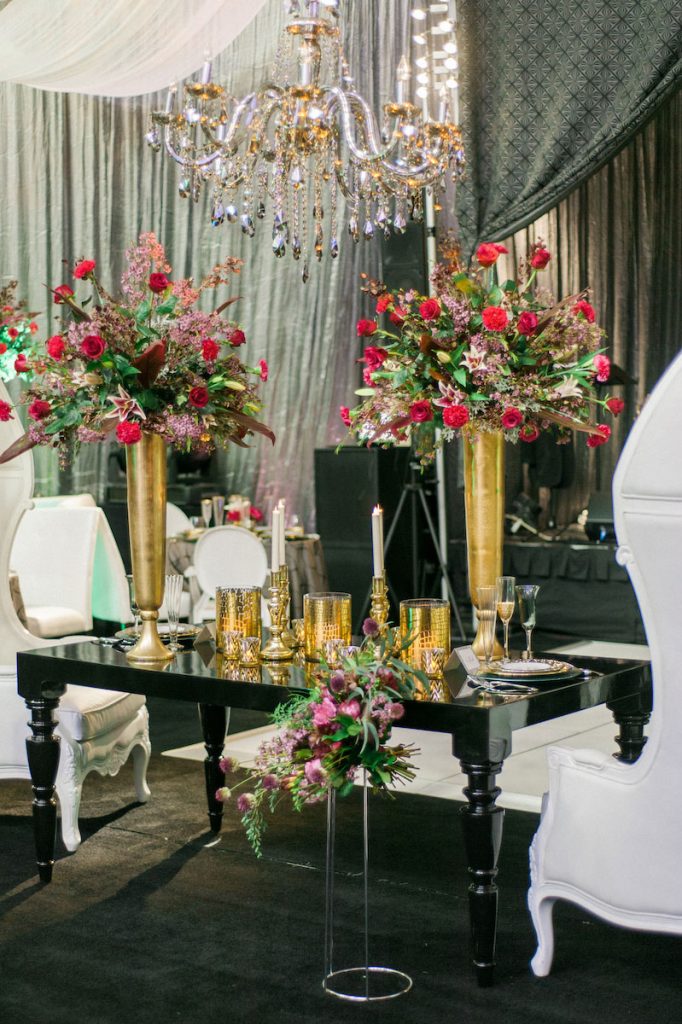 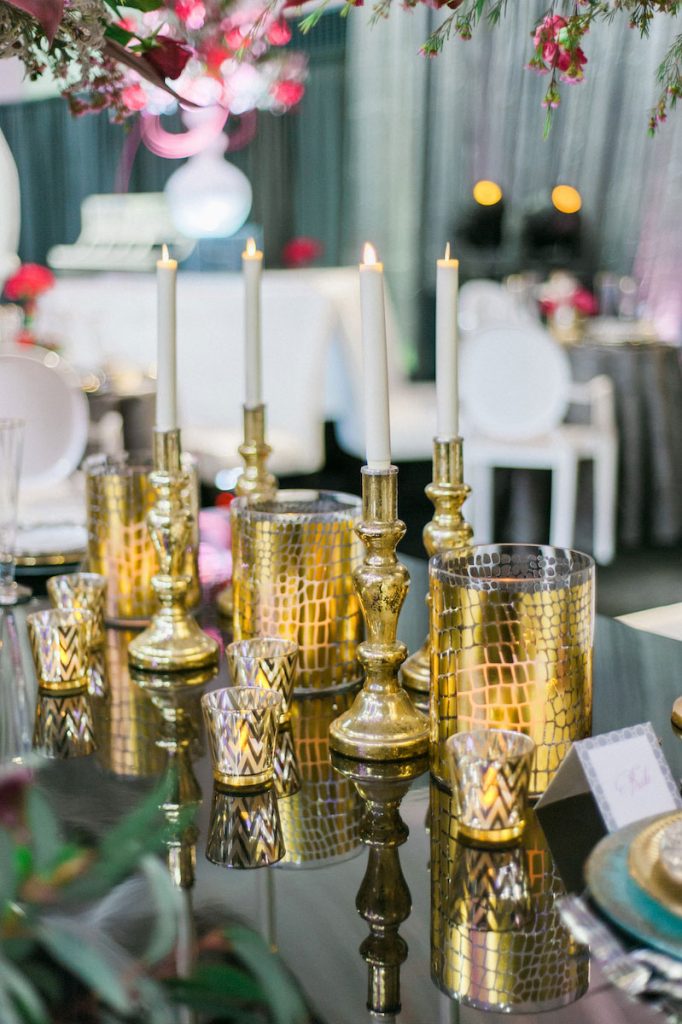 For those working on a budget, jazzing up thrift pieces is also a great way to embrace this style if you have an eye for detail. If you found an over-the-top brass chandelier, for example, replace the flame-tip bulbs with mod opaque globe bulbs. It creates the juxtaposition of super clean with super fussy, which is so relevant in Hollywood Regency.

Hollywood Regency is a perfect style for a younger generation. This look allows for a mix of vintage and bold trendy pieces that can live in harmony. If you love modern lines, you can still incorporate something like a high-lacquered Queen Anne chair to be current. Finishes are so important to this look, including glimmery golds and matte silvers combining with glossy looks and interesting textures.

For the guest tables, we selected a distressed silver and Robin’s egg blue charger. Atop this we placed an ornate gold empire style dinner plate, followed by an art deco salad plate. Deco-inspired flatware and a trio of stemware in smoke, gold pave and fluting completed the opulent place setting.

An ornate menu card would feature a deco adornment. What made this truly unique was the orientation of the text to make the place card a diamond rather than a square. 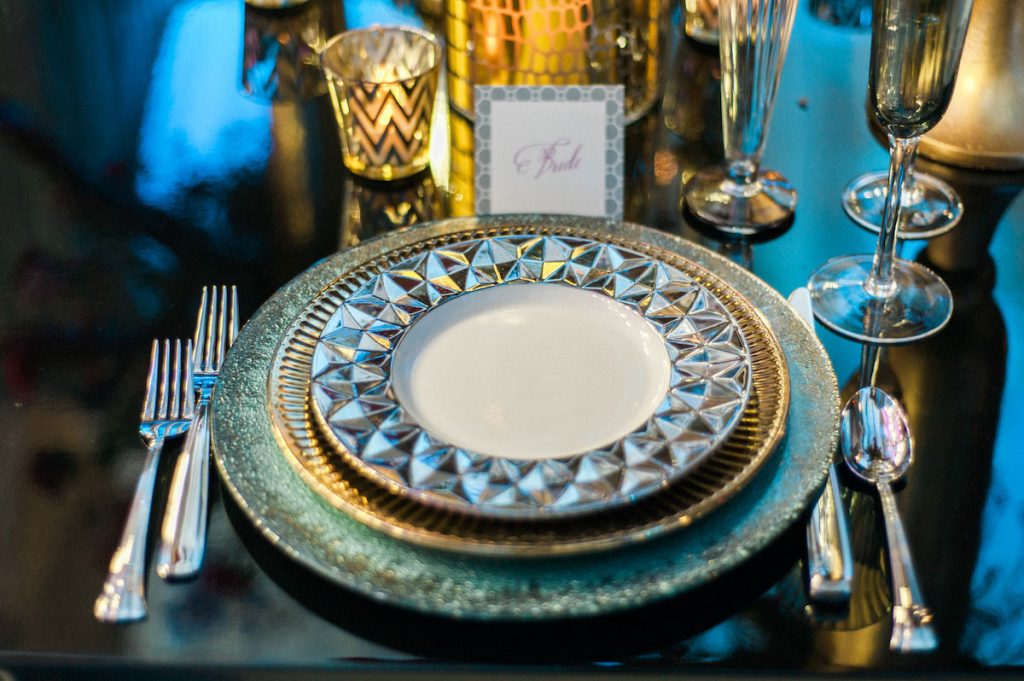 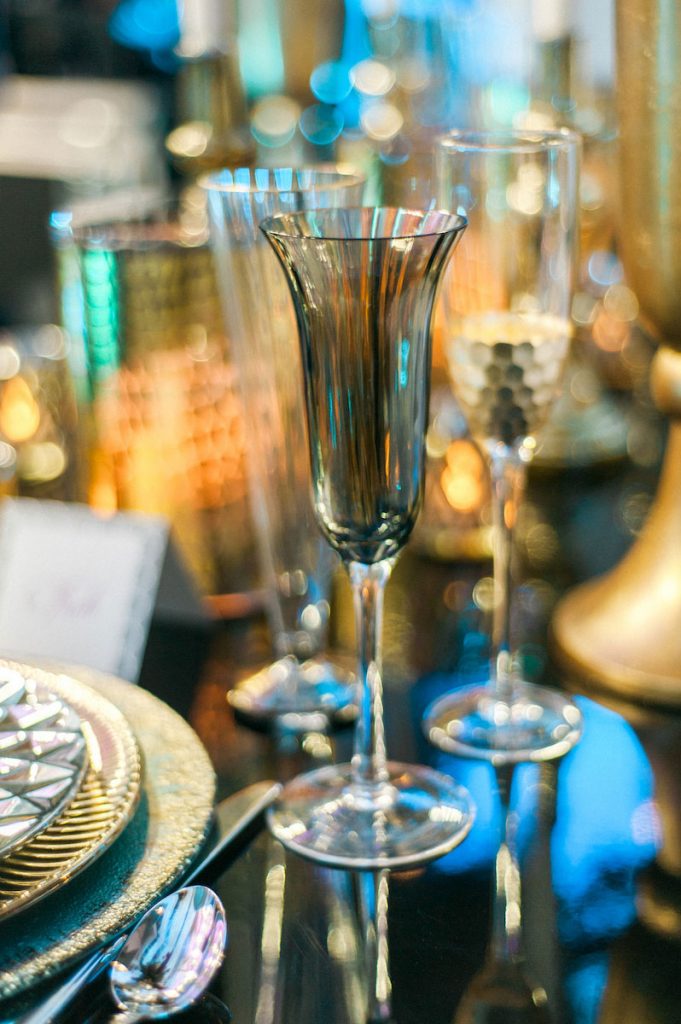 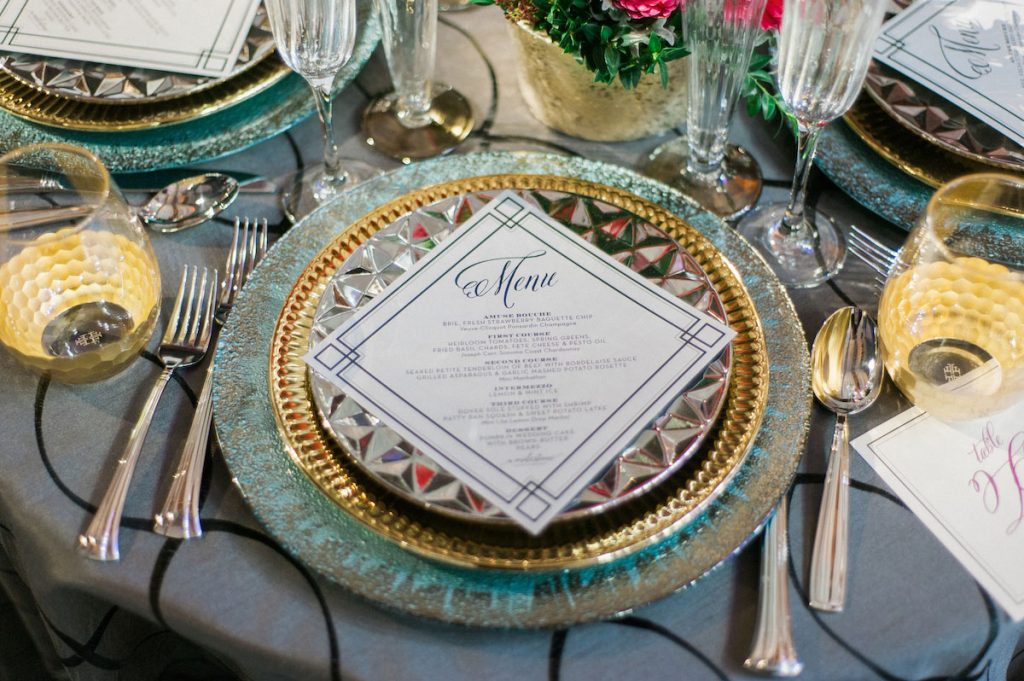 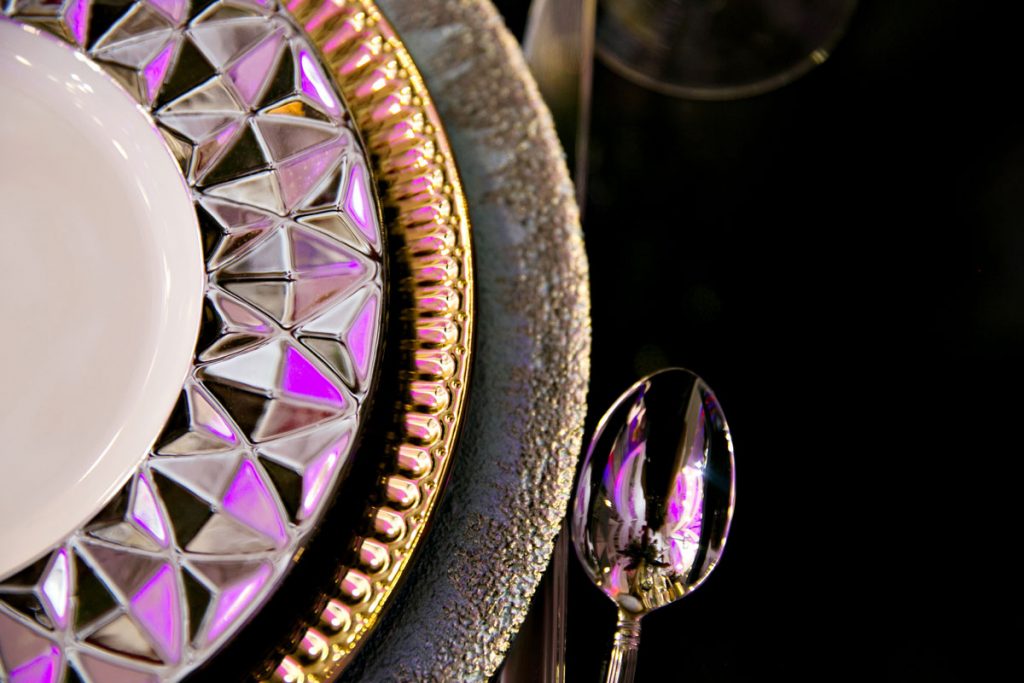 The piece de la resistance, however, was the striking six-layer wedding cake, which became the centerpiece of the wedding. Lush pink roses wrapped the sides of the graphic tiered work of art. Each layer individually designed with silver and blue accents from an art-deco starburst to a tufted quilted pattern on the base. Even the top mimicked the smoke black chandeliers with a crystal drop design, which made the cake feel like it was part of the opulent chandelier. 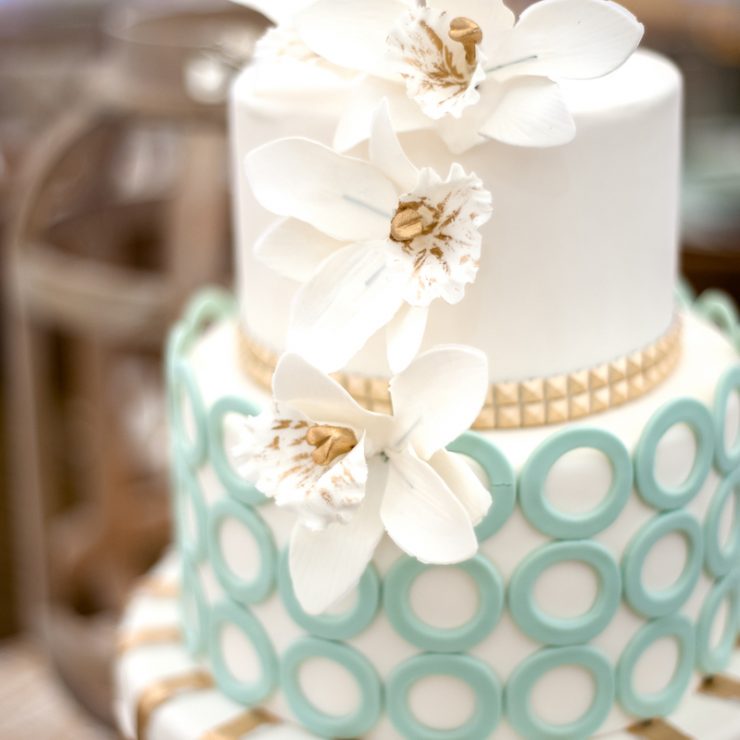 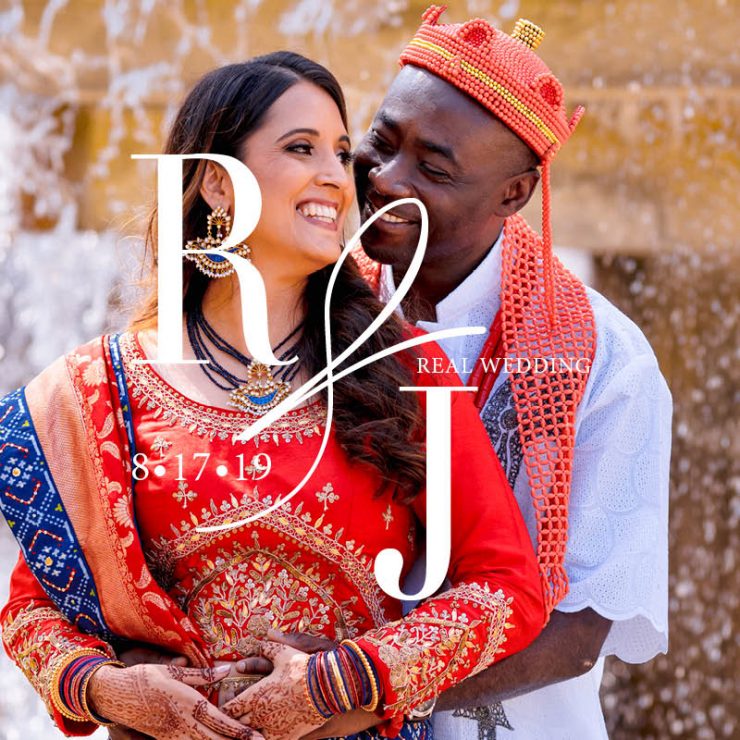 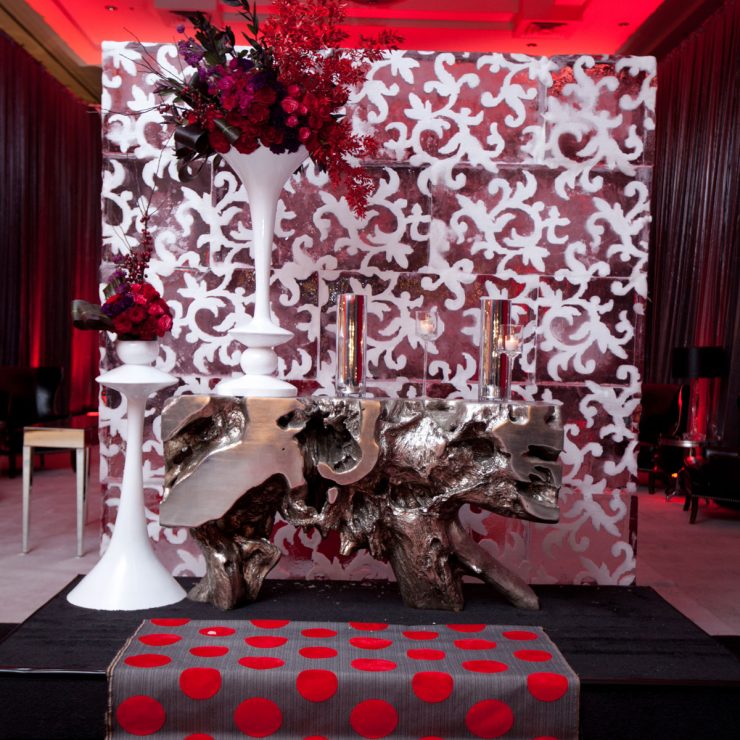